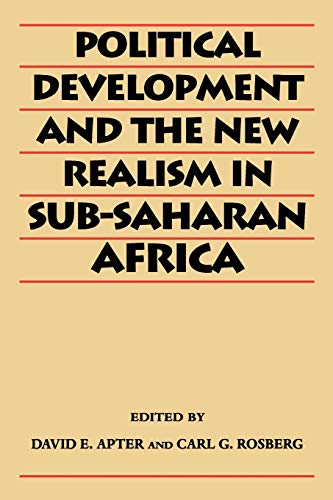 Political Development and the New Realism in Sub-Saharan Africa
by Edited by David E. Apter

Out of Stock
$82.99
inc. GST
Since the 1950s, David Apter and Carl Rosberg have been among the leading American scholars in African studies. In this volume they, along with other specialists in the field, explore the new configurations of African politics.
Very Good
Only 0 left

Political Development and the New Realism in Sub-Saharan Africa Summary

Political Development and the New Realism in Sub-Saharan Africa by Edited by David E. Apter

Since the 1950s David Apter and Carl Rosberg have been among the leading American scholars in African studies. In this volume they, along with other specialists in the field, explore the new configurations of African politics. With tentative efforts at a revival of democracy now taking place, it seems appropriate to reassess the theoretical debates and empirical themes that have characterised postwar Sub-Saharan African politics. Focusing on a ""new realism"" which has emerged among Africanists since the dismantling of colonial rule, the essays are presented as a corrective both to the initial euphoria informing African studies and to the later tendency to place blame for all of Africa's political and economic difficulties on the receding spectre of colonial oppression. In the introductory chapter, Apter and Rosberg point out that Sub-Saharan African has been particularly vulnerable to fluctuating truths and flights of interpretive fancy. No other continent has attracted such multiple layers of power and prejudice from the outside. Judgments and speculations about the very nature of Africanness have been common. Today everything is subject to controversy - race, ethnicity, language, religion, ideology - and all the debates are heated up by severe economic decline and the long-standing, unresolved difficulties of state formation. Crawford Young (University of Wisconsin) examines the role of nationalism in the political awakening of the area and looks at ethnicity as a possible resource rather than an obstacle to state formation. Joel D. Barkan (University of Iowa) identifies the new and emerging issues in civil society and the revival of modernisation theory in a context of accountability, Richard L. Sklar (University of California, Los Angeles) works through the inadequacies of conventional notions of markets and of bourgeoisie and proletariat and shows that neither capitalism nor socialism can be looked to for definitive solutions. Michael F. Lofchie (University of California, Los Angeles) examines the reassertion of neoclassical economic theory and evaluates new policy alternatives designed to correct distortions in African economies. The analysis by Thomas M. Callaghy (University of Pennsylvania) advocates a new balance between the needs of the state for stability and the development need for a market-driven economy. Colin Leys (Queen's University, Kingston, Canada) reviews the arguments for dependency and classical Marxism in the context of Kenya and is concerned with whether or not, however defined, the Kenyan bourgeoisie can engender capitalist growth. Michael Chege (Programme Officer in Governance and International Affairs for the Ford Foundation in Harare, Zimbabwe) examines the contrasting patterns of capitalist and socialist orientations in development in both Kenya and Tanzania under their respective presidents, and Robert M. Jackson (University of British Columbia, Vancouver) and Carl G. Rosberg conclude with an examination of how the political dyseconomy of personal rule, with its tolerance of corruption and clientelism, has undermined the viability of most new African states.

About Edited by David E. Apter

David E. Apter is Henry J. Heinz II Professor of Comparative Political and Social Development at Yale University. His publications incude Ghana in Transition; The Political Kingdom in Uganda: A Study of Bureaucratic Nationalism and The Politics of Modernization.

GOR010224615
Political Development and the New Realism in Sub-Saharan Africa by Edited by David E. Apter
Edited by David E. Apter
Used - Very Good
Hardback
University of Virginia Press
1993-11-30
384
0813914795
9780813914794
N/A
Book picture is for illustrative purposes only, actual binding, cover or edition may vary.
This is a used book - there is no escaping the fact it has been read by someone else and it will show signs of wear and previous use. Overall we expect it to be in very good condition, but if you are not entirely satisfied please get in touch with us.