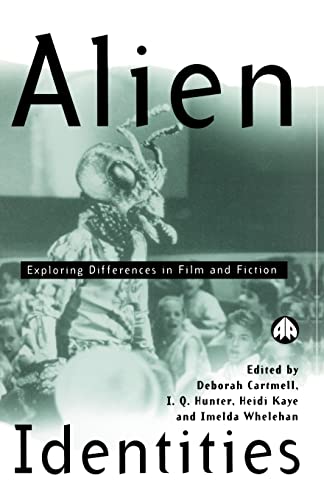 Out of Stock
$20.49
inc. GST
A lively re-examination of the 'alien' as metaphor in film and fiction
Very Good
Only 0 left

Alien Identities: Exploring Differences in Film and Fiction by Edited by Deborah Cartmell

This is a lively and stimulating look at representations, mutations and adaptations of 'the alien' in literature, film and television.

Using notions of the alien and alienation in a broadly defined sense, the contributors cover early science fiction, from the gothic aliens of Dracula and H.G. Wells, to the classic fifties Cold War sci-fi movies, such as War of the Worlds, twentieth-century reworkings of various 'alien' metaphors, such as The Fly movies and the Alien series, and comic variations on the theme such as Mars Attacks.

Moving beyond the conventional genre boundaries of the alien, particular essays look, too, at 'race' as an alien condition, and at the use of illness and disease as a metaphor for alienation in modern film and fiction.

'An inventive collection of essays' -- SCOPE: An online journal of film studies

About Edited by Deborah Cartmell

Introduction - Alien Identities: Exploring Difference in Film and Fiction by Heidi Kaye and I.Q. Hunter 1. Satan Bugs in the Hot Zone: Microbial Pathogens as Alien Invaders by Peter Hutchings 2. America's Domestic Aliens: African Americans and the Issue of Citizenship in the Jefferson/Hemings Story in Fiction and Film by Sharon Monteith 3. See Europe with ITC: Stock Footage and the Construction of Geographical Identity by Nick Freeman 4. `Leaving the West and Entering the East': Refiguring the Alien from Stoker to Coppola by Paul O'Flinn 5. Another Time, Another Space: Modernity, Subjectivity and The Time Machine by Jonathan Bignell 6. 'The Martians are Coming!': Civilisation v. Invasion in The War of the Worlds and Mars Attacks! by Liz Hedgecock 7. Vagabond Desire: Aliens, Alienation and Human Regeneration in Arkady and Boris Strugatsky's Roadside Picnic and Andrey Tarkovsky's Stalker by John Moore 8. Adaptation, Teleportation and Mutation from Langelaan's to Cronenberg's The Fly by Karin Littau 9. The Alien Series and Generic Hybridity by Martin Flanagan 10. Aliens, (M)Others, Cyborgs: The Emerging Ideology of Hybridity by Patricia Linton Index

GOR005320922
Alien Identities: Exploring Differences in Film and Fiction by Edited by Deborah Cartmell
Edited by Deborah Cartmell
Film/Fiction
Used - Very Good
Paperback
Pluto Press
1999-03-08
208
0745314007
9780745314006
N/A
Book picture is for illustrative purposes only, actual binding, cover or edition may vary.
This is a used book - there is no escaping the fact it has been read by someone else and it will show signs of wear and previous use. Overall we expect it to be in very good condition, but if you are not entirely satisfied please get in touch with us.