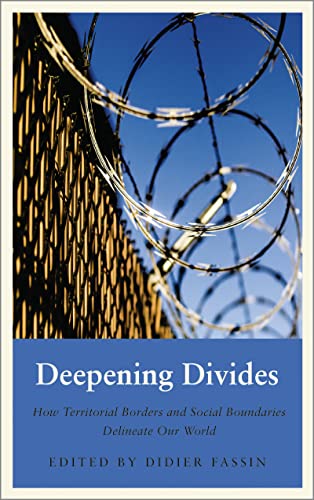 Out of Stock
$24.49
inc. GST
A non-Eurocentric, interdisciplinary collection arguing that boundaries and borders are best understood as overlapping categories.
Like New
Only 0 left

Deepening Divides: How Physical Borders and Social Boundaries Delineate our World by Edited by Didier Fassin

At a glance, 'borders' and 'boundaries' may seem synonymous. But in the real (geopolitical) world, they coexist as distinct, albeit overlapping entities: the former a state's delimitation of territory; the latter the social delineation of differences.

The refugee crisis in Europe showed how racial and ethnic boundaries are often instrumentalised to justify the strengthening of state borders - regardless of the cost in human life. But there are other, less tragic, examples that illustrate this overlapping as well, and ultimately demonstrate that the oft-differentiated spheres of borders and boundaries are best understood through their relationship to one another.

'This volume is the first to bring together two distinct phenomena usually studied in separate strands of research: how migration regimes police the territorial boundaries of states, and how differentiating between and discriminating against minority groups creates social boundaries within states. An important and timely intellectual move' -- Andreas Wimmer, author of 'Ethnic Boundary Making: Institutions, Networks, Power'
'This is a splendid collection of essays that illustrates how racial, gender and class-based discrimination is instrumental to the justification of the state's right to exclude. With case studies from five continents and genuinely interdisciplinary contributions, this volume is an indispensable theoretical and political tool for reflecting on migration and territorial rights in the 21st century' -- Lea Ypi, author of 'Global Justice and Avant-Garde Political Agency'

About Edited by Didier Fassin

Didier Fassin is the James D. Wolfensohn Professor of Social Science at the Institute for Advanced Study, Princeton. He is the author of numerous books including The Will to Punish (2018), Life: A Critical Users Manual (2018), Prison Worlds: An Ethnography of the Carceral Condition (2016) and Enforcing Order: An Ethnography of Urban Policing.

GOR010433718
Deepening Divides: How Physical Borders and Social Boundaries Delineate our World by Edited by Didier Fassin
Edited by Didier Fassin
Anthropology, Culture and Society
Used - Like New
Paperback
Pluto Press
2019-12-20
272
0745340431
9780745340432
N/A
Book picture is for illustrative purposes only, actual binding, cover or edition may vary.
The book has been read, but looks new. The book cover has no visible wear, and the dust jacket is included if applicable. No missing or damaged pages, no tears, possible very minimal creasing, no underlining or highlighting of text, and no writing in the margins.