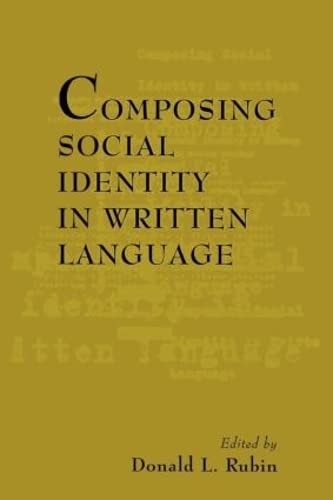 In Stock
$16.99
+10% GST
This volume is a contribution to the literature on literacy and culture. It links together aspects of social variation that have not often been thus juxtaposed: ethnicity/nationality, gender and participant role relations. Its theme is that all of these factors are aspects of writers' identities.
Very Good
Only 1 left

This volume constitutes a unique contribution to the literature on literacy and culture in several respects. It links together aspects of social variation that have not often been thus juxtaposed: ethnicity/nationality, gender, and participant role relations. The unifying theme of this collection of papers is that all of these factors are aspects of writers' identities -- identities which are simultaneously expressed and constructed in text.

The topic of social identity and writing can be approached from a variety of scholarly avenues, including humanistic, critical, and historical perspectives. The papers in the present volume make reference to and contribute to such humanistic perspectives; however, this book lies squarely within the tradition of social science. It draws primarily upon the disciplines of linguistics, discourse analysis, anthropology, social and cognitive psychology, and education studies.

The constituent topics of social identity, style, and writing themselves lie at the intersections of several related fields of scholarship. Writing remains of peak interest to educators from many fields, and is still a "hot" topic. The instructional ramifications of the particular issues addressed in this volume are of vital concern to educational systems adjusting to the realities of our multicultural society. This publication, therefore, should attract a substantial and diverse readership of scholars, educators, and policymakers affiliated with many fields including applied linguistics, composition and rhetoric, communication studies, dialect studies, discourse analysis, English composition, English/language arts education, ethnic studies, language behavior, literacy, sociolinguistics, stylistics, women's studies, and writing research and instruction.

GOR010092227
Composing Social Identity in Written Language by Edited by Donald L. Rubin
Edited by Donald L. Rubin
Used - Very Good
Paperback
Taylor & Francis Inc
1995-03-01
264
0805813845
9780805813845
N/A
Book picture is for illustrative purposes only, actual binding, cover or edition may vary.
This is a used book - there is no escaping the fact it has been read by someone else and it will show signs of wear and previous use. Overall we expect it to be in very good condition, but if you are not entirely satisfied please get in touch with us.