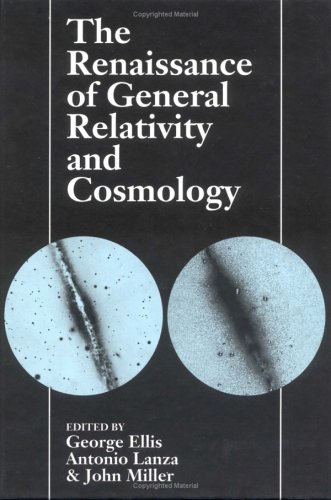 The Renaissance of General Relativity and Cosmology Summary

The Renaissance of General Relativity and Cosmology: A Survey to Celebrate the 65th Birthday of Dennis Sciama by Edited by George Ellis

The past forty years have been a time of spectacular development in the study of general relativity and cosmology. A special role in this has been played by the influential research groups led by Dennis Sciama in Cambridge, Oxford, and Trieste. In April 1992 many of his ex-students and collaborators came to Trieste (where he is currently Professor) for a review meeting to celebrate his 65th birthday. This book consists of written versions of the talks presented which, taken together, comprise an authoritative overview of developments which have taken place during his career to date. The topics covered include fundamental questions in general relativity and cosmology, black holes, active galactic nuclei, galactic structure, dark matter, and large scale structure.

The Renaissance of General Relativity and Cosmology Reviews

'Libraries should make sure they have a copy, so that the younger generation are able to learn something about the achievements of a man who has probably strongly influenced their research.' The Observatory
"Sciama's collaborators, students, and `grandstudents' provide interesting reviews and original essays--20 in all--on subjects ranging from galactic astronomy to quasars, from quantum measurement theory to superconducting strings...snapshots of an interesting moment in the development of theoretical cosmology." Science, Aaugust 5, 1994
"Ellis...shows how the revival of general relativity and cosmology has been influenced by Sciama's research groups at Cambridge, Oxford, and Tieste. He gives a short summary of Sciama's research, his passion for physics and for understanding the universe, and his care for students...Ellis emphasizes the relevance of exact solutions in gravitation and how the solutions may give interesting insights when their global properties are studied." Enric Verdaguer, Mathematical Reviews grtavitations

GOR010435606
The Renaissance of General Relativity and Cosmology: A Survey to Celebrate the 65th Birthday of Dennis Sciama by Edited by George Ellis
Edited by George Ellis
Used - Very Good
Hardback
Cambridge University Press
1993-11-25
342
0521433770
9780521433778
N/A
Book picture is for illustrative purposes only, actual binding, cover or edition may vary.
This is a used book - there is no escaping the fact it has been read by someone else and it will show signs of wear and previous use. Overall we expect it to be in very good condition, but if you are not entirely satisfied please get in touch with us.