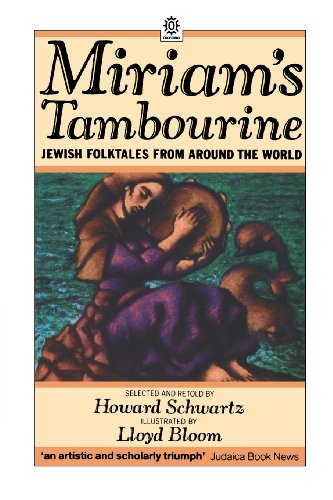 In Stock
22,49 $
inc. GST
50 tales drawn from varying ages and parts of the world reflecting Jewish history and the diversity of Jewish culture, including figures eg Elijah the Prophet and rabbis as well as traditional folk-tale themes.
Very Good
Only 1 left

Miriam's Tambourine: Jewish Folk Tales from Around the World by Edited by Howard Schwartz

This is a collection of 50 tales drawn from nearly every age and every part of the world, reflecting the length of Jewish history and the diversity of the Judaic culture. Some of the characters and plots will be familiar from other folk-tales but these stories also include Jewish figures and themes such as Elijah the Prophet, Golem, rabbis, the mysteries of the cabbala, pogroms, the longed-for arrival of the Messiah and the return to Israel. The tales come from Palestine, Babylon, Persia, Eygpt, Morocco, Holland, Germany, Eastern Europe, Italy, France, Spain, India, Afghanistan and many other lands. In addition, there is a section of annotation giving a brief history and analysis of each story, providing cultural background and an interpretation of biblical and mystical symbolism, a glossary of Jewish terms and a bibliography.

About Edited by Howard Schwartz

Howard Schwartz is a Jewish folklorist and anthologist. He is author of Elijah's Violin and Other Jewish Fairytales and The Captive Soul of the Messiah: New Tales of Rabbi Nachman and editor of several celebrated anthologies of Jewish poetry and literature.

Foreword. Introduction - the world of the Jewish folktale. The stories. Sources and commentary. Glossary.

GOR001645916
Miriam's Tambourine: Jewish Folk Tales from Around the World by Edited by Howard Schwartz
Edited by Howard Schwartz
Oxford paperbacks
Used - Very Good
Paperback
Oxford University Press
1988-09-01
432
0192821369
9780192821362
N/A
Book picture is for illustrative purposes only, actual binding, cover or edition may vary.
This is a used book - there is no escaping the fact it has been read by someone else and it will show signs of wear and previous use. Overall we expect it to be in very good condition, but if you are not entirely satisfied please get in touch with us.