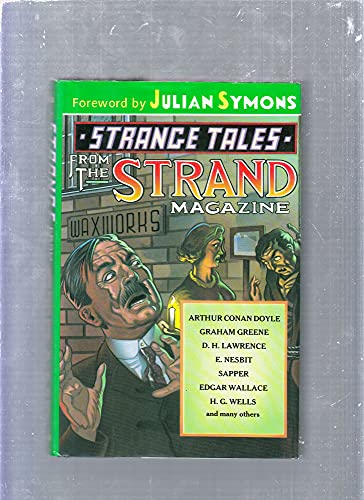 Out of Stock
$20.49
inc. GST
A collection of 29 tales of the weird and uncanny, of natural disasters and horrifying monsters, first published in the "Strand" magazine, which was founded in 1891. The authors include Graham Greene, Conan Doyle, D.H.Lawrence, Edgar Wallace, H.G.Wells, Sapper, and E.Nesbit.
Very Good
Only 0 left

Containing 29 stories all originally published in the "Strand", this collection provides a rich mix of horror and the supernatural for all lovers of the macabre. In addition to ghost stories, there are tales of unnatural disasters, of horrifying monsters, of madness and revenge, and even comic fantasies. As well as chilling contributions from Graham Greene, Conan Doyle, H.G.Wells, Villiers de l'Isle Adam, and Sapper, there are unsettling stories from the more unlikely pens of Beverley Nichols, D.H.Lawrence, and children's writer E.Nesbit.

GOR001061315
Strange Tales from "The Strand" by Edited by Jack Adrian
Edited by Jack Adrian
Used - Very Good
Hardback
Oxford University Press
1991-10-31
398
019212305X
9780192123053
N/A
Book picture is for illustrative purposes only, actual binding, cover or edition may vary.
This is a used book - there is no escaping the fact it has been read by someone else and it will show signs of wear and previous use. Overall we expect it to be in very good condition, but if you are not entirely satisfied please get in touch with us.