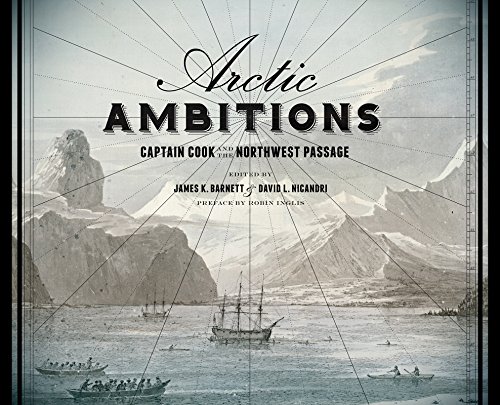 Captain James Cook is justly famous for his explorations of the southern Pacific Ocean, but his contributions to the exploration of the northern Pacific and the Arctic are arguably equally significant. On his third and final great voyage, Cook surveyed the northwest American coast in the hopes of finding the legendary Northwest Passage. While dreams of such a passage proved illusory, Cook's journey produced some of the finest charts, collections, and anthropological observations of his career, helped establish British relations with Russia, and opened the door to the hugely influential maritime fur trade.

Accompanying an exhibition of the same name, Arctic Ambitions: Captain Cook and the Northwest Passage sheds new light on Cook's northern exploration. A collection of essays from an international and interdisciplinary group of scholars, the book uses artifacts, charts, and records of the encounters between Native peoples and explorers to tell the story of this remarkable voyage and its historical context. In addition to discussing Cook's voyage itself, the book also provides new insights into Cook's legacy and his influence on subsequent expeditions in the Pacific Northwest. Finally, the collection uses Cook's voyage as a springboard to consider the promise and challenge of the "new north" today, demonstrating that it remains, as in Cook's time, a unique meeting place of powerful political, cultural, economic, and environmental forces.

True to the title, the book and the show together aspire to completely reassess Cook's North Pacific explorations, and the volume itself--brimming with quality reproductions of period map work, expedition watercolors and later lithographs, artifacts or all description, and no fewer than eighteen separate essays by renowned experts in their respective fields--tackles the nuances of this important slice of history with integrity and vigor.

This book is exceptionally well designed and printed. Illustrating the text are striking reproductions of art work and maps produced by members of the expedition, especially John Webber...[A] good read. This book will appeal to readers who are new to the subject as well as experts in the field.

About Edited by James K. Barnett

GOR009711455
Arctic Ambitions: Captain Cook and the Northwest Passage by Edited by James K. Barnett
Edited by James K. Barnett
Used - Very Good
Hardback
University of Washington Press
2015-01-28
448
0295993995
9780295993997
N/A
Book picture is for illustrative purposes only, actual binding, cover or edition may vary.
This is a used book - there is no escaping the fact it has been read by someone else and it will show signs of wear and previous use. Overall we expect it to be in very good condition, but if you are not entirely satisfied please get in touch with us.