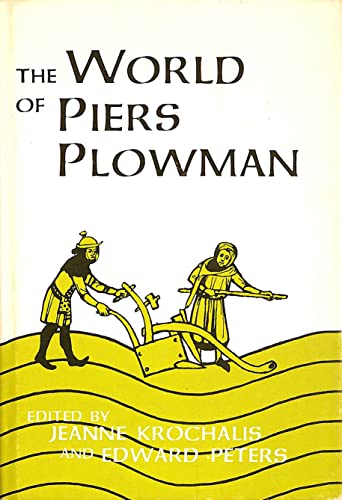 The World of "piers Plowman"
by Jeanne Krochalis

This collection is uniquely helpful to students of medieval history, literature, and Western civilization.

The World of "piers Plowman" Summary

The World of "piers Plowman" by Jeanne Krochalis

Next to Chaucer's Canterbury Tales, William Langland's Piers Plowman is perhaps the best-known literary picture of fourteenth-century England. Langland's work, more socially concerned and critical than Chaucer's, reflected an age of religious controversy, social upheaval, and political unrest. The World of Piers Plowman puts the reader in touch with the sources that helped shape Langland's somber vision. The representative documents included in this book, often cited in connection with the poem yet difficult to come by, disclose the background of Piers Plowman in social and economic history as well as folklore, art, theology, homilies, religious tractates, and chronicles.

The seven sections into which the readings are divided illustrate ideas concerning (1) the heavens, the universal Church, England, and London; (2) material and spiritual abuses; (3) the most influential literary genres of the period; (4) exempla, moral tales from hagiography, sermon literature, and tracts on moral theology; (5) types of practical instruction available to the devout layperson; (6) the multiple meanings in many literary works; and (7) the moment of death, the judgments on the soul, and the torments and rewards of the afterlife.

The World of "piers Plowman" Reviews

"Particularly useful for giving students a social and political context for theological debate, as well as establishing an appreciation of the literary genres in which religious education took place."--Horizons

GOR009692859
The World of "piers Plowman" by Jeanne Krochalis
Jeanne Krochalis
Middle Ages
Used - Very Good
Hardback
University of Pennsylvania Press
1975-12-01
265
081227699X
9780812276992
N/A
Book picture is for illustrative purposes only, actual binding, cover or edition may vary.
This is a used book - there is no escaping the fact it has been read by someone else and it will show signs of wear and previous use. Overall we expect it to be in very good condition, but if you are not entirely satisfied please get in touch with us.