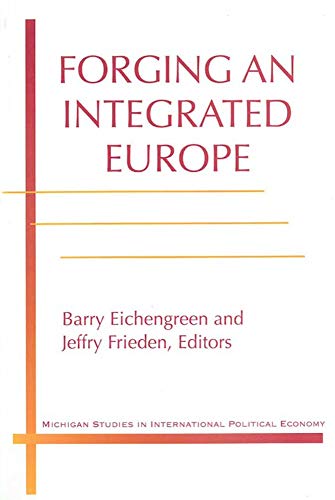 Forging an Integrated Europe
by Edited by Jeffry A. Frieden

Out of Stock
$71.99
inc. GST
Gauging the economic and political challenges to European integration
Very Good
Only 0 left

Forging an Integrated Europe: The challenges ahead by Edited by Jeffry A. Frieden

As European integration has deepened and become more invasive, the tension between the authority of the European Union and the autonomy of member states has increased, while dissatisfaction with the political institutions of the European Union has increased dramatically. How fast and how far European integration will proceed are critical issues for scholars and policymakers in Europe and the United States. Barry Eichengreen and Jeffry Frieden have assembled a group of prominent economists and political scientists to discuss the most important--and most difficult--political and economic issues involved in European integration. The book focuses on three major issues: economic and monetary union, the reform and development of responsive political institutions for the Union, and the enlargement of the Union to include states to the east.
In examining these issues, the writers consider such prob-lems as the trade-off between the benefits of international economic cooperation and the ability to pursue domestic welfare policies; how to increase the political accountability of the institutions of the EU; and how the EU can both be enlarged in membership and deepened in terms of the powers given community institutions.
The contributors are Steven Arndt, Peter Bofinger, Christian de Boisseu, Michele Fratianni, Geoffrey Garrett, Jurgen von Hagen, Ander Todal Jenssen, Ken Kletzer, Lisa Martin, Jonathan Moses, Jean Pisani-Ferry, and Michael Wallerstein, in addition to the editors.
Barry Eichengreen is Professor of Economics, University of California, Berkeley. Jeffry Frieden is Professor of Government, Harvard University.

GOR010243730
Forging an Integrated Europe: The challenges ahead by Edited by Jeffry A. Frieden
Edited by Jeffry A. Frieden
Michigan Studies in International Political Economy
Used - Very Good
Paperback
The University of Michigan Press
1998-12-31
352
0472086103
9780472086108
N/A
Book picture is for illustrative purposes only, actual binding, cover or edition may vary.
This is a used book - there is no escaping the fact it has been read by someone else and it will show signs of wear and previous use. Overall we expect it to be in very good condition, but if you are not entirely satisfied please get in touch with us.