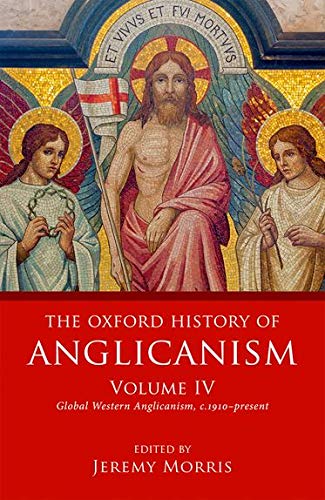 The Oxford History of Anglicanism is a major new and unprecedented international study of the identity and historical influence of one of the world's largest versions of Christianity. This global study of Anglicanism from the sixteenth century looks at how was Anglican identity constructed and contested at various periods since the sixteenth century; and what was its historical influence during the past six centuries. It explores not just the ecclesiastical and theological aspects of global Anglicanism, but also the political, social, economic, and cultural influences of this form of Christianity that has been historically significant in western culture, and a burgeoning force in non-western societies today. The chapters are written by international exports in their various historical fields which includes the most recent research in their areas, as well as original research. The series forms an invaluable reference for both scholars and interested non-specialists. Volume four of The Oxford History of Anglicanism explores Anglicanism from 1910 to present day.

a monumental project [...] This is an excellent volume, and if the others in the series are as good then Rowan Strong and his colleagues will have provided us with an absolutely invaluable resource. * Revd Dr Bruce Kaye AM, Charles Sturt University, New South Wales, Theology *
Oxford University Press and the editors are to be warmly congratulated for a resource long overdue to historians and which will no doubt be the authoritative source for exploring the 'question' of Anglicanism for decades to come. It may also provide for Anglicans worldwide that spur to 'patient listening and looking', commended as characteristically Anglican by Geoffrey Rowell, which the Communion requires if it is to endure and flourish. * Daniel Inman, International Journal for the Study of the Christian Church *
This series represents the most comprehensive study of Anglicanism to date. This series will take its place as a vital resource for scholarship and will serve as a milestone in the development of Anglican studies ... it is an extraordinary resource. It synthesizes a wide range of scholarship on Anglicanism. It ought to be the first point of reference for research on any aspect of Anglican history ... This is a collection that belongs in every library dedicated to the study of history and religion. * Daniel Joslyn-Siemiatkoski, Anglican and Episcopal History *
It is a strong team and the contributors handle their themes well but special mention must be made of Mark Chapman, Paul Avis and Matthew Grimley... Space has forced me to concentrate on a few chapters but every contributor has something of importance to say * Paul Richardson *
[T]his volume is a valuable first synthetic account of Anglicanism in the West in a crucial period. * Peter Webster, Reading Religion *
Brundage's ambitious focus of two hundred years of complex and nuanced history across two, and at times multiple, transnational arenas, does much to bring renewed analysis to the account of the Irish America diaspora and Irish nationalist progress within it. Yet the work's sheer range of focus also lays the foundation for further study on Irish nationalism's complex history in both America and beyond over the course of the nineteenth and twentieth centuries. * Catherine Bateson, Irish Studies Review *

Dr Jeremy Morris is Master of Trinity Hall. He was Dean of Trinity Hall from 2001 to 2010, and then of King's College, Cambridge from 2010 to 2014. His academic interests include modern European church history, Anglican theology and ecclesiology (especially High Anglicanism), the ecumenical movement, and arguments about religion and secularization. His publications include F. D. Maurice and the Crisis of Christian Authority (OUP, 2005) and The High Church Revival in the Church of England (Brill, 2016).