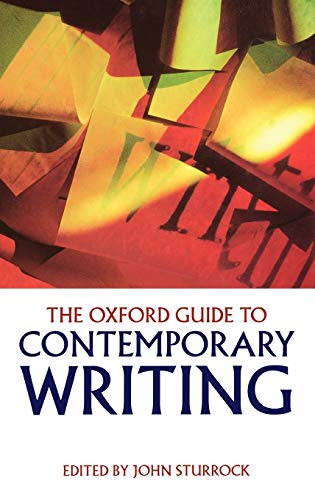 The Oxford Guide to Contemporary Writing
by Edited by John Sturrock

In Stock
$13.99
+10% GST
This text provides an account of significant contemporary writing since 1960. It covers cultures such as Australian, American-Spanish, French and Israeli and concentrates on fiction and poetry. Biographical and background information is included, along with criticism.
Good
Only 2 left

The Oxford Guide to Contemporary Writing by Edited by John Sturrock

Keeping track of contemporary writing is by its nature difficult. What are the recent developments in Chinese or Israeli fiction? What has happened to poetry in Russia since the fall of Communism? Are we even up to date with the best novels or plays of English-speaking countries round the world? Every year, so much is published which we feel we should know about, that there's a strong need for a volume to evaluate it and put us on the track of what is most worth reading. This new Guide - the only work of its kind to cover world literature of the last thirty years - does just that: in twenty-eight lively and trenchant chapters it assesses the most important and interesting literary developments in all five continents. Taking 1960 as its starting-point, and coming right up to date, the book explores the recent writing of cultures as various as Australian and Spanish-American, French, Japanese, and Czech, Indian and New Zealand - and of course American, English, Irish, Scottish, and Welsh. Each chapter discusses the literary and cultural contexts for authorship in its particular area, throwing light on a great number of significant writers - including household names such as Mishima, Toni Morrison, Derek Walcott, Patrick White, and Gunter Grass, but setting alongside them many others who may be less familiar but whose work is often just as well worth reading. Combining hard information with intelligent opinion, the Guide offers a discriminating - and sometimes controversial - view of a broad range of contemporary literatures. Anyone interested in the state of world literature today will find the Oxford Guide to Contemporary Writing a fascinating and essential reference book. Contributors... African Countries (Jeremy Harding); Arab Countries (Robert Irwin); Australia (Peter Craven); Brazil (John Gledson); Canada (Sandra Djwa); China, Taiwan, and Hong Kong (Alison Bailey); Czech Republic and Slovakia (Igor Hajek); England (James Wood); France (John Taylor); German-speaking countries (Rhys Williams); Greece (Peter Mackridge); Hungary (Richard Aczel); India (Richard Cronin); Ireland (Patricia Craig); Israel (Bryan Cheyette); Italy (Peter Hainsworth); Japan (Mark Morris); New Zealand (Iain Sharp); Poland (George Hyde with Wieslaw Powaga); Portugal (Maria Guterres); Russia (Robert Porter); Scandinavia (Janet Garton); Scotland (Kasia Boddy); Spain (Abigail Lee Six); Spanish America (Michael Wood); United States (Wendy Lesser); Wales (Ned Thomas); West Indies (Al Creighton)

About Edited by John Sturrock

John Sturrock is Consulting Editor of The London Review of Books, and former Deputy Editor of The Times Literary Supplement. He is the author of The French New Novel (OUP 1969); Paper Tigers: The Ideal Fictions of Jorge Luis Borges (OUP l977); and the editor of Structuralism and Since (OUP l980).

GOR001977031
The Oxford Guide to Contemporary Writing by Edited by John Sturrock
Edited by John Sturrock
Used - Good
Hardback
Oxford University Press
1996-06-13
504
0198182627
9780198182627
N/A
Book picture is for illustrative purposes only, actual binding, cover or edition may vary.
This is a used book - there is no escaping the fact it has been read by someone else and it will show signs of wear and previous use. Overall we expect it to be in very good condition, but if you are not entirely satisfied please get in touch with us.