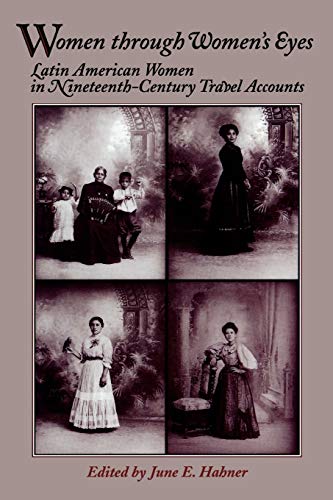 Women Through Women's Eyes
by Edited by June E. Hahner

Out of Stock
$38.99
inc. GST
The nineteenth century was a period of peak popularity for travel to Latin America, where political independence was accompanied by loosened travel restrictions. Such expeditions resulted in numerous travel accounts, most by men.
Very Good
Only 0 left

The nineteenth century was a period of peak popularity for travel to Latin America, where a new political independence was accompanied by loosened travel restrictions. Such expeditions resulted in numerous travel accounts, most by men. However, because this period was a time of significant change and exploration, a small but growing minority of female voyagers also portrayed the people and places that they encountered. Women through Women's Eyes draws from ten insightful accounts by female visitors to Latin America in the nineteenth century. These firsthand tales bring a number of Latin American women into focus: nuns, market women, plantation workers, the wives and daughters of landowners and politicians, and even a heroine of the independence movement. Questions of family life, religion, women's labor, and education are addressed, in addition to the interrelationships of men and women within the structure of Latin American societies. Women through Women's Eyes is a perceptive look at Latin American women from various walks of life during this period. Within these pages, the reader catches lengthy glimpses of the women on both sides of the travel accounts-author and subject-and thereby may examine them all and their societies close-up.

Women through Women's Eyes is a fascinating, revealing and instructive document which captures the role of women in Latin-American society. . . . * Bulletin of Spanish Studies *
June Hahner's excellent volume provides attractive texts for classroom analysis and learning experiences. Women through Women's Eyes will be of interest to all historians who use travel accounts in teaching and writing about women's history in Latin America. -- Mary Karasch, Oakland University
This is a wonderful book! Hahner presents lively readings that reflect the experiences of women travelers, their views of Latin America, and the lives of Latin American women themselves. The choice of travelers includes women who were themselves from various national and social backgrounds, and who visited or lived in Mexico, Guatemala, Cuba, Brazil, or Chile. In addition to giving us a fascinating picture of the lives of women of all social classes and racial groups, we are treated to everyday life ranging from housekeeping to church-going to marriage customs to slave dances. This book is a must-read for any class on the history of Latin American women. It will whet appetites to read and re-read both the classic travelers and some newfound nineteenth-century voyagers. -- Susan M. Socolow, Emory University
Habner provides a rare look at the daily life of a wide range of nineteenth-century Latin American women. * Canadian Journal of Latin American and Caribbean Studies *

About Edited by June E. Hahner

June E. Hahner is professor of history at the State University of New York at Albany.

GOR010172259
Women Through Women's Eyes: Latin American Women in 19th Century Travel Accounts by Edited by June E. Hahner
Edited by June E. Hahner
Latin American Silhouettes
Used - Very Good
Paperback
Scholarly Resources Inc.,U.S.
1998-08-01
184
0842026347
9780842026345
N/A
Book picture is for illustrative purposes only, actual binding, cover or edition may vary.
This is a used book - there is no escaping the fact it has been read by someone else and it will show signs of wear and previous use. Overall we expect it to be in very good condition, but if you are not entirely satisfied please get in touch with us.