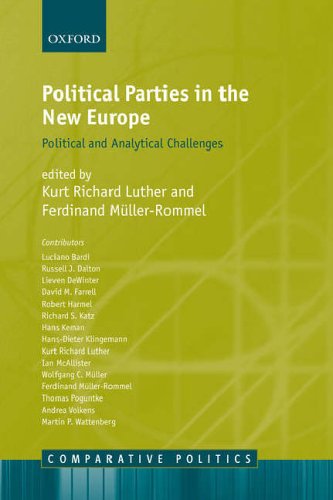 Out of Stock
$43.99
inc. GST
Some of the foremost scholars of European party politics review the latest empirical findings on the challenges currently faced by West European political parties. Published to great critical acclaim in hardback, this paperback edition will be essential reading for anyone interested in the changing nature of western Europe's political parties.
Very Good
Only 0 left

Political Parties in the New Europe: Political and Analytical Challenges by Edited by Kurt Richard Luther

The scope and intensity of the challenges currently faced by West European political parties is exceptionally great, threatening the viability of the manner in which they have traditionally operated and causing them to seek new behaviours and strategies. This volume brings together some of the foremost scholars of European party politics, whose evaluation of political parties in 'the new Europe' is organised under four broad headings: 'Parties and Society'; 'Parties as Purposive Organizations'; 'Parties and National Government' and 'Parties, the Nation State, and Beyond'. The contributors review the latest empirical findings and provide a concise, critical review of the theoretical and methodological 'state of the art'. They also highlight the analytical challenges confronting party researchers and suggest new avenues for party research.

Review from previous edition The result is a set of highly rewarding and challenging contributions. This really is a very, very good book, and it constitutes a major contribution to party studies. It comes as close as I have yet seen to a 'state of the art' in the field, and it is a credit to the editors and to their Summer School work over the years. * Peter Mair, Party Politics *
... this is a worthy book, both for the wealth of empirical material and as a contribution to further theorizing on the various dimensions of political parties... One strength of this volume is that it is more coherent than many of the recently published competitor volumes on political parties, and its theoretical frameworks and empirical analyses are more encompassing and carried out more systematically. It is furthermore marked by the consistently high quality of the contributions. * Political Studies Review *

GOR005324492
Political Parties in the New Europe: Political and Analytical Challenges by Edited by Kurt Richard Luther
Edited by Kurt Richard Luther
Comparative Politics
Used - Very Good
Paperback
Oxford University Press
2005-09-01
416
0199283982
9780199283989
N/A
Book picture is for illustrative purposes only, actual binding, cover or edition may vary.
This is a used book - there is no escaping the fact it has been read by someone else and it will show signs of wear and previous use. Overall we expect it to be in very good condition, but if you are not entirely satisfied please get in touch with us.