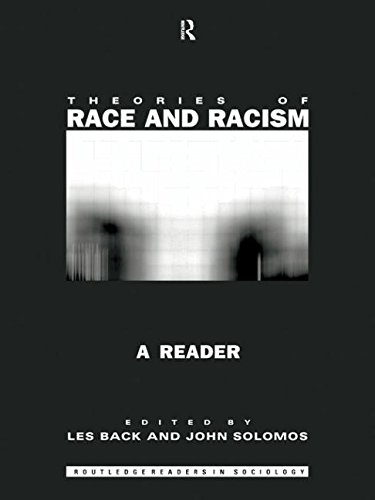 Theories of Race and Racism
by Edited by Les Back

In Stock
$20.99
+10% GST
An important and innovative collection that brings together the work of scholars who have helped to shape the study of race and racism as a historical and contemporary phenomenon.
Very Good
Only 1 left

Theories of Race and Racism Summary

Theories of Race and Racism: A Reader by Edited by Les Back

This comprehensive Reader brings together foundation work in the study of race and ethnicity and writings from many of the most exciting scholars today. It is divided into the following main sections:

Each section begins with a brief editorial introduction, providing a guide to the readings by historically contextualizing them and relating them to other writings throughout the book. Cross-national in content, historical in scope and offering a variety of topical perspectives, Theories of Race and Racism will be an invaluable resource for undergraduates across a range of disciplines.

Theories of Race and Racism Reviews

'A balanced and largely successful attempt at mapping the historical origins of 'race' and racism, the changing signification of 'race' during the 20th century, and its current place within contemporary social theory. The engagement with the work of scholars on anti-Semitism is a welcome departure for a book on racism, and the further inclusion of questions concerning cultural identity and ethnicity - often ignored in more orthodox accounts of racism - gives the collection as a whole a distinctiveness and greater contemporary relevance.' - Sociological Research Online - http://socresonline.org.uk

Introduction: Theorising Race and Racism Part 1: Origins and Transformations First Impressions. The Idiom of Race Race and Racism. Race Relations. The Conservation of Races. Racial Beliefs in America Part 2: Sociology, Race and Social Theory The Nature of Race Relations. Race: What it is not. Race Relations in Sociological Theory Apropos the Idea of 'Race' Again. Old and New Identities, Old and New Ethnicities. Racial Knowledge. The Theoretical Status of the Concept of Race Part 3: Racism and Anti-Semitism The Jews: Myth and Counter-Myth Elements of Anti-Semitism. Modernity, Racism, Extermination. Are Jews White? Part 4: Colonialism, Race and the Other The Facts of Blackness. Imperial Culture. The White Family of Man. Under Western Eyes. Sexual Affronts and Racial Frontiers. Race, Time and the Revision of Modernity Part 5: Feminism, Difference and Identity Racism and Feminism. White Woman Listen! Black Feminist Thought. Race and Rights. Difference, Diversity, Differentiation. White Women, Race Matters. Black Feminism and the Academy. Black Skin/White Boards Part 6: Changing Boundaries and Spaces The Dialectics of Diasporic Identification. Race, Reform and Retrenchment. America Again at the Crossroads. Identity and the Spaces of Authenticity. The Matter of Whiteness Identity and Diversity in Postmodern Politics. The Lore of the Homeland: Hindu Nationalism and Indigenist 'Neoracism'. Enjoy Your Nation as Yourself! Racial Identity and Racial Identification. Notes. Guides to Further Reading. Index

GOR001997636
Theories of Race and Racism: A Reader by Edited by Les Back
Edited by Les Back
Routledge Student Readers
Used - Very Good
Paperback
Taylor & Francis Ltd
1999-12-09
672
0415156726
9780415156721
N/A
Book picture is for illustrative purposes only, actual binding, cover or edition may vary.
This is a used book - there is no escaping the fact it has been read by someone else and it will show signs of wear and previous use. Overall we expect it to be in very good condition, but if you are not entirely satisfied please get in touch with us.