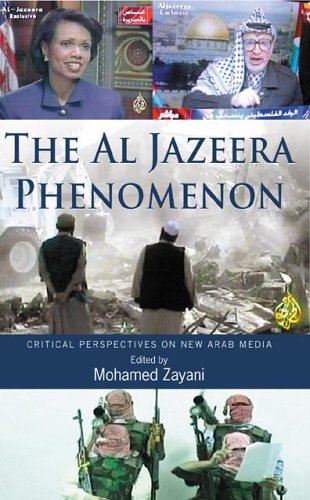 The Al Jazeera Phenomenon
by Edited by Mohamed Zayani

Out of Stock
$17.49
inc. GST
Fascinating critique of Al Jazeera's politics, its agenda, its programmes and its treatment of the West.
Very Good
Only 0 left

Few phenomena in the Arab world are more controversial than Al Jazeera - the satellite television news channel that, despite its brief history, has made itself known throughout the world and changed the face of a formerly parochial Arab media.

This timely collection of essays by Arab and Western scholars provides a better understanding of the network - and how it has affected the public and even foreign policies of Western governments - than any other of the few books published in English up to now.

The book provides rare insights into Al Jazeera's politics, its agenda, its programmes, its coverage of regional crises, and its treatment of the West. The authors attempt to gauge the network's impact on ordinary Arab viewers, understand its effect on an increasingly visible Arab public sphere, and map out the role it plays in regional Arab politics. The image of Al Jazeera that emerges from this book is much more complex than its depiction in Western media. It reveals the role that the network plays in shaping ideas and reconstructing Arab identities during a crucial juncture in Middle Eastern history and politics.

'A first in the field of Middle Eastern media studies ... the issue of public policy, foreign relations and the impact of the media on democracy, human rights and development remains burning' -- Azza Karam

About Edited by Mohamed Zayani

Mohamed Zayani is an award-winning author and professor of critical theory at the Georgetown University School of Foreign Service in Qatar. His works include Digital Middle East (2018), Networked Publics and Digital Contention (2015), and The Al Jazeera Phenomenon (Pluto 2005).

Acknowledgements About the Contributors Part I. Introduction 1. Al Jazeera and the Vicissitudes of the New Arab Mediascape by Mohamed Zayani Part II. Al Jazeera, Regional Politics and the Public Sphere 2. The Politics of Al Jazeera or the Diplomacy of Doha by Olivier Da Lage 3. Influence without Power: Al Jazeera and the Arab Public Sphere by Mohammed El Oifi 4. Al Jazeera.net: Identity Choices and the Logic of the Media by Gloria Awad Part III. Al Jazeera Programming 5. The Opposite Direction: A Program which Changed the Face of Arab Television by Faisal Al Kasim 6. Media Brinksmanship: Al Jazeera's The Opposite by Muhammad I. Ayish 7. Women, Development and Al Jazeera: A Balance Sheet Part IV. Al Jazeera and Regional Crises by Naomi Sakr 8. Al Jazeera and the War in Afghanistan: A Delivery System or a Mouthpiece by Ehab Y. Bessaiso 9. Witnessing the Intifada: Al Jazeera's Coverage of the Palestinian-Israeli Conflict by Mohamed Zayani 10. Al Jazeera and American Public Diplomacy: A Dance of Intercultural (Mis-)Communication by R.S. Zaharna Postface: Jon B. Alterman. 'Arab Media Studies: Some Methodological Considerations Selected Bibliography Index

GOR005563843
The Al Jazeera Phenomenon: Critical Perspectives on New Arab Media by Edited by Mohamed Zayani
Edited by Mohamed Zayani
Used - Very Good
Paperback
Pluto Press
2005-03-20
232
0745323332
9780745323336
N/A
Book picture is for illustrative purposes only, actual binding, cover or edition may vary.
This is a used book - there is no escaping the fact it has been read by someone else and it will show signs of wear and previous use. Overall we expect it to be in very good condition, but if you are not entirely satisfied please get in touch with us.