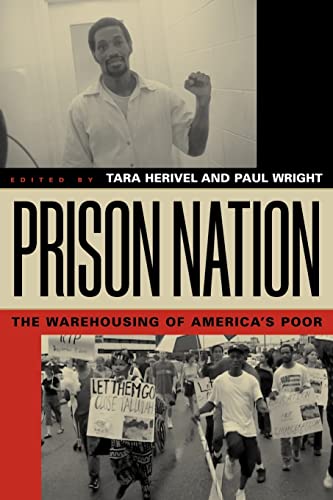 Out of Stock
$64.99
inc. GST
Charts the injustices of prison privatization, race and the justice system, the quixotic drug war and the rarely discussed prison AIDS crisis. With fascinating narratives, shocking tales and small stories of hope.
Good
Only 0 left

Prison Nation: The Warehousing of America's Poor by Edited by Paul Wright

First Published in 2003. Routledge is an imprint of Taylor & Francis, an informa company.

"This biography of Hurston is one of the best books I've read in years and I unabashedly highly recommend it."
-Jack Danger, "The Portland Alliance
""Prison Nation
goes beyond the numbers to show the complex, interwoven reasons that have produced the prison-industrial complex. In every section of the book...readers will find solid reporting, gripping writing and political revelation."
-Ken Silverstein, from the Preface
"This riveting collection makes a compelling case that the United States has an INjustice system at work, and that it operates its own gulag within this supposedly free society, largely out of sight of its citizenry. The brutalities, cruelties and inhumanity widely prevalent in the way people are put in prison, kept there, degraded and mistreated, as recounted in this book's accounts of racist bias, medical care, prison labor, parole, rape, and the "restraint chair," among many other topics, read like something out of Kafka and Solzenhitzyn. This important book is a shocker."
-Edward S. Herman, co-author of "Manufacturing Consent
"An extraordinary collection of essays by some of our most astute observers of the American prison system. What they tell us is shocking and sobering, and their analysis forces to think beyond the cruelties of everyday prison life to the social forces behind those cruelties. This volume makes clear the connection between prisons and poverty, the class nature of the justice system. It is both a treasury of information and a profound examination of imprisonment in America."
-Howard Zinn, author of "A People's History of the United States
"Every American with any concern for justice and democracy ought to read thisdevastating book--but not right before bedtime. "Prison Nation is a true horror story, a profound revelation of what the prison system is doing both to millions of poor Americans trapped in its no-exit nightmare and to America itself. But it is also an inspiring book, bringing together some of the most important work by dozens of dedicated scholars and activists."
-H. Bruce Franklin, John Cotton Dana Professor of English and American Studies, Rutgers University

About Edited by Paul Wright

Paul Wright is a Washington state prisoner, jailhouse lawyer, political activist and journalist. Paul is the co-founder of Prison Legal News, a monthly magazine published since 1990 that is prisoner written, edited and published. His last book was The Celling of America. Tara Herivel is a prisoners' rights activist and lawyer who has written for Prison Legal News and other progressive periodicals in the Seattle area.

GOR007178785
Prison Nation: The Warehousing of America's Poor by Edited by Paul Wright
Edited by Paul Wright
Used - Good
Paperback
Taylor & Francis Ltd
2002-12-30
348
0415935385
9780415935388
N/A
Book picture is for illustrative purposes only, actual binding, cover or edition may vary.
The book has been read but remains in clean condition. All pages are intact and the cover is intact. Some minor wear to the spine.