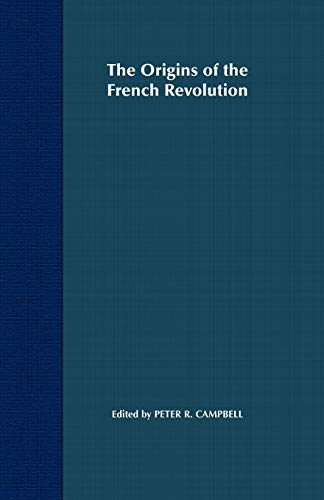 In Stock
$32.99
+10% GST
The question of what brought about the French Revolution remains the subject of vigorous debate and perennial interest. This clear collection is an introduction to a complex topic, written by ten distinguished American and British historians.
Very Good
Only 2 left

The Origins of the French Revolution Summary

The French Revolution, an event of world historical importance that gave birth to modern politics, has long been a subject of debate. Naturally, the question of its origins remains a key area of controversy. This collection of essays by a team of distinguished experts in the field offers original but approachable views and interpretations that will engage students and scholars alike. Each chapter contains new research and focuses upon a major strand of the present debate.
The Origins of the French Revolution explores:
- the process of decision-making
- the financial crisis
- the Paris parlement
- pamphlet literature
- the ideas of the Enlightenment
- peasant involvement
- the Estates General of 1789

Chapters on art and theatre, on the development of cultural history, and the corrosive role of religious conflict upon the fabric of the monarchy ensure that stimulating new perspectives now form a key part of future discussion. A full introduction considers the nature of the debate and offers a thought-provoking interpretation of the crisis of the absolute monarchy that led to the collapse of state and society in the summer of 1789.

The Origins of the French Revolution Reviews

'This highly readable collection of essays written by cutting-edge historians expertly guides students and advanced scholars through the controversies over the origins of the French Revolution.' - Thomas E. Kaiser, University of Arkansas at Little Rock, USA 'This is a book that deserves serious scholarly attention as well as evaluation as a student reader...I find much to recommend the approach of this book. The attention to detail and the quality of research are both impressive. More important, the theme of these articles highlights an emphasis on politics and contingency too often ignored in other histories...It forces those who would emphasize discourses, ideology, gender, and global perspectives to come to grips with the inexorability of politics that characterized daily life in that period.' - Jack R. Censer, George Mason University, H-France Review 'This collection is a welcomed addition as both students and scholars will benefit from its multi-faceted approach in explaining the causes of this great cataclysm. Above all it demonstrates that the best interpretive framework for understanding the French Revolution is one which incorporates socio-economic, political and cultural methods of explanation.' - Early Modern European History

About Edited by Peter Robert Campbell

PETER R. CAMPBELL is Senior Lecturer in History at the University of Sussex, UK. He has written widely on the ancien regime and his books include The Ancien Regime in France (1988), Louis XIV (1993) and Power and Politics in Old Regime France (1996).

GOR001978436
The Origins of the French Revolution by Edited by Peter Robert Campbell
Edited by Peter Robert Campbell
Problems in Focus
Used - Very Good
Paperback
Macmillan Education UK
2005-11-15
384
0333949714
9780333949719
N/A
Book picture is for illustrative purposes only, actual binding, cover or edition may vary.
This is a used book - there is no escaping the fact it has been read by someone else and it will show signs of wear and previous use. Overall we expect it to be in very good condition, but if you are not entirely satisfied please get in touch with us.