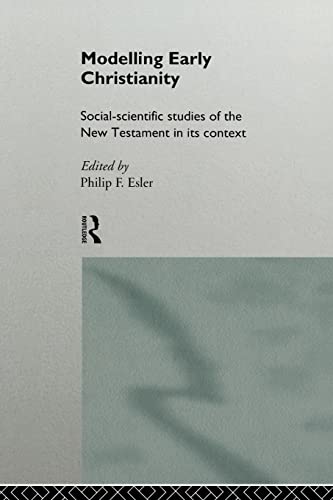 Out of Stock
$32.99
inc. GST
Explores the fascinating and foreign social context of first century Palestine and the Greco-Roman East, in which the Chrstian faith was first proclaimed and the New Testament written, so enabling a better understanding of the texts.
Well Read
Only 0 left

Modelling Early Christianity: Social-Scientific Studies of the New Testament in its Context by Edited by Philip Esler

Modelling Early Christianity explores the intriguing foreign social context of first century Palestine and the Greco-Roman East, in which the Christian faith was first proclaimed and the New Testament documents were written. It demonstrates that a sophisticated analysis of the context is essential in order to understand the original meaning of the texts.
The contributors examine social themes such as early Christian group formation, the centrality of kinship and honour and the economic setting. They offer a wealth of novel and socially realistic interpretations which make sense of the texts. At the same time, Modelling Early Christianity contains significant new ideas on the relationship between social-scientific and literary-critical analysis, the theoretical justification for model-use and the way these new approaches can fertilise contemporary Christian theology.

"One does not need to share this groups canonical bias nor its theological motivations to profit from this volume's wisdom (and splendid bibliography) for the project of redescribing early Christianity as processes of social formations...Permits and deserves a wide and diverse readership.."
-" Religious Studies Review, Vo. 23, No. 1, January 1997
"Attention to the sorts of questions these authors raise and seek to answer should make the reader more sensitive to and aware of the very real human and social pressures, drives, and goals which were operative in the early churches and the surrounding society."
-"Ashland Theological Journal

GOR010233250
Modelling Early Christianity: Social-Scientific Studies of the New Testament in its Context by Edited by Philip Esler
Edited by Philip Esler
Used - Well Read
Paperback
Taylor & Francis Ltd
1995-12-07
366
0415129818
9780415129817
N/A
Book picture is for illustrative purposes only, actual binding, cover or edition may vary.
This is a used book. We do our best to provide good quality books for you to read, but there is no escaping the fact that it has been owned and read by someone else previously. Therefore it will show signs of wear and may be an ex library book.