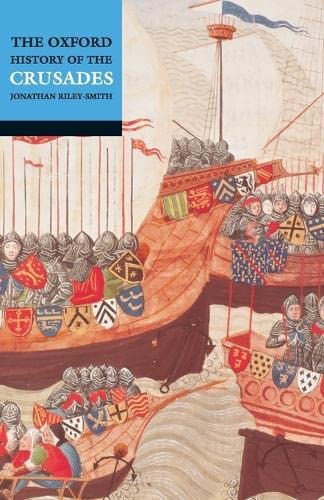 In Stock
$18.49
inc. GST
Written by a team of leading scholars, this fascinating book presents an authoritative and comprehensive history of the Crusades from the preaching of the First Crusade in 1095 to the legacy of crusading ideas and imagery today.
Very Good Good
Only 2 left

The Oxford History of the Crusades Summary

Written by a team of leading scholars, this fascinating book presents an authoritative and comprehensive history of the Crusades, from the preaching of the First Crusade in 1095 to the legacy of crusading ideas and imagery today. Reflecting the recent developments in crusade historiography, it covers crusading in many different theatres of war. The concepts of apologists, propagandists, song-writers, and poets, and the perceptions and motives of the crusaders themselves are described, as are the emotional and intellectual reactions of the Muslims to Christian holy war. The institutional developments - legal, financial, and structural - which were necessary to the movement's survival - are analysed. Several chapters are devoted to the western settlements established in the eastern Mediterranean region in the wake of the crusades, to the remarkable art and architecture associated with them, and to the military orders. The subject of the later crusades, including the history of the military orders from the sixteenth to the eighteenth centuries, is given the attention it deserves. And the first steps are taken on to a field that is as yet hardly explored - the survival of the ideas and images of crusading into the nineteenth and twentieth centuries.

The Oxford History of the Crusades Reviews

Review from previous edition makes the results of the recent academic study of the Crusades accessible to a wide section of the general public and succeeds in conveying that this is a living and developing subject, which has far from exhausted its potential * THES *
The great merit of Professor Riley-Smith's book is to follow the story down to the present day * Church Times *
Detailed exploration of the plots, intrigue and subterfuge surrounding the events and leading protagonists make for fascinating reading * Universe *
fascinating ... a comprehensive history of the wars * History Today *
In a series of finely-crafted and admirably succinct essays the contributors unravel a number of important medieval political and religious themes. This comprehensive approach adds a great deal to the book's interest and presents some of the best insights of modern Crusading scholarship ... excellent * Tablet *

About Edited by Professor Jonathan Riley-Smith

Professor Jonathan Riley-Smith is Dixie Professor of Ecclesiastical History at Cambridge University and has been a Fellow of Emmanuel College, Cambridge, since 1994. He has published widely on medieval history and the Crusades and his books include What were the Crusades? (1977), The Crusades: idea and reality (1981), The First Crusade and the Idea of Crusading (1986), and The Atlas of the Crusades (1991). He was President of the Society for the Study of the Crusades and the Latin East from 1990 to 1995.

GOR001221268
The Oxford History of the Crusades by Edited by Professor Jonathan Riley-Smith
Edited by Professor Jonathan Riley-Smith
Used - Very Good
Paperback
Oxford University Press
2002-03-28
480
0192803123
9780192803122
N/A
Book picture is for illustrative purposes only, actual binding, cover or edition may vary.
This is a used book - there is no escaping the fact it has been read by someone else and it will show signs of wear and previous use. Overall we expect it to be in very good condition, but if you are not entirely satisfied please get in touch with us.