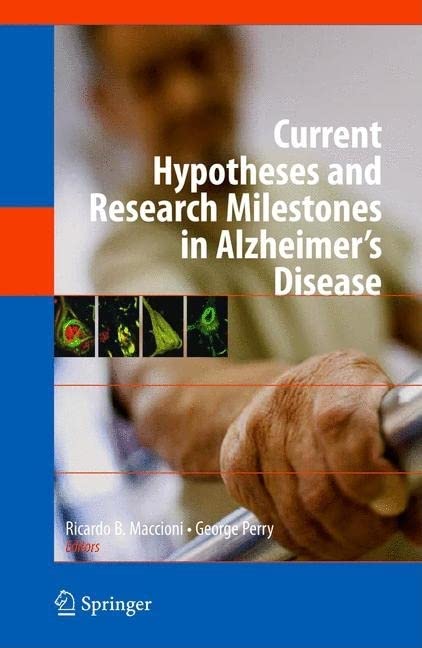 Current Hypotheses and Research Milestones in Alzheimer's Disease
by Edited by Ricardo B. Maccioni

This volume contains 20 seminal chapters by authors with varying views on the neuroanatomical, neuropathological, neuropsychological, neurological, and molecular aspects of Alzheimer's Disease (AD). This book is an invaluable addition to the study of AD.

Current Hypotheses and Research Milestones in Alzheimer's Disease by Edited by Ricardo B. Maccioni

Almost four decades of innovative and intensive research on Alzheimer's disease (AD) have brought major advances in our understanding of its pathogenesis, improved tools for diagnosis, and strategies for its treatment. This research has helped build a solid foundation of knowledge in the neurosciences and biological basis of AD and AD-related neurological disorders. Scientific background and insightful hypotheses are of major relevance in order to approach to an effective therapy for this devastating disease.

Students, academics and medical professionals will find this text an invaluable addition to the study of this important subject.

About Edited by Ricardo B. Maccioni

Ricardo B. Maccioni, Ph.D. is a Professor of Neurology at the Medical School and the Department of Biology, Faculty of Sciences, at the University of Chile. George Perry, Ph.D. is the Dean of the College of Sciences at The University of Texas at San Antonio. Dr. Perry received his doctoral degree in marine biology from the Scripps Institution of Oceanography at the University of California at San Diego, served as a postdoctoral fellow in cell biology at Baylor College of Medicine, and earned a bachelor's degree in zoology from the University of California at Santa Barbara. He is an authority on Alzheimer's research; his groundbreaking work brought oxidative stress to the study of AD. This discovery, far in advance of others, has put him among the top dozen most cited investigators studying AD/oxidative stress and among the top 25 neuroscientists in the world. Dr. Perry serves on the editorial board of more than 60 publications and is founding Editor-in-Chief of the highest impact journal in AD research, the Journal of Alzheimer's Disease. He recently won the Denham Harmon Lifetime Achievement Award (discoverer of the Free Radical Theory of Aging) from the American Association for Aging, and currently holds the Zenith Award from the Alzheimer Association.

GOR010095880
Current Hypotheses and Research Milestones in Alzheimer's Disease by Edited by Ricardo B. Maccioni
Edited by Ricardo B. Maccioni
Used - Very Good
Hardback
Springer-Verlag New York Inc.
2009-01-31
254
0387879943
9780387879949
N/A
Book picture is for illustrative purposes only, actual binding, cover or edition may vary.
This is a used book - there is no escaping the fact it has been read by someone else and it will show signs of wear and previous use. Overall we expect it to be in very good condition, but if you are not entirely satisfied please get in touch with us.