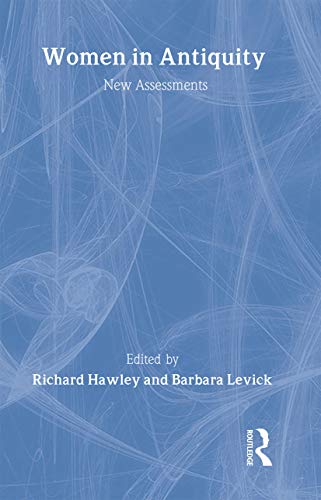 Women in Antiquity: New Assessments
by Edited by Richard Hawley

In Stock
$82.99
+10% GST
Explores and expands on scholarly debates on the status and representation women in antiquity; invaluable reading for all students and teachers of ancient history.
Good
Only 1 left

Women in Antiquity: New Assessments by Edited by Richard Hawley

The study of gender in classical antiquity has undergone rapid and wide-ranging development in the past. The contributors reassess the role of women in diverse contexts and areas, such as archaic and classical Greek literature and cult, Roman imperial politics, ancient medicine and early Christianity. Some offer detailed interpretations of topics which have been widely discussed since the 1960s whilst others highlight recent areas of research. This study reflects and expands on existing scholarly debates on the status and representation of women in the ancient world, focusing on methodology, and suggesting areas for future research and improvement.

'... the strength of this book lies in two main areas: that it does raise some new issues and provoke thought and criticism, and that it is a good teaching tool.' - Classics Ireland

'Through collections like these, the study of women in antiquity has achieved a high degree of academic respectability, and as a mark of that maturity a number of contributions look back self-critically on the genre itself, re-examining the assumptions inherent in the study of ancient women.' - Times Literary Supplement

'This is a valuable collection of papers, for several areas of current research into the social history of the Greco-Roman world.' - The Classical Review

'...these essays form a most useful and convenient collection' - Greece and Rome

Preface 1. Beryl Rawson: From 'Daily Life' to 'Demography' 2. Marylin Arthur Katz: Ideology and 'The Status of Women' in Ancient Greece 3. Ken Dowden: Approaching women through Myth - vital tool or Self-delusion? 4. Lucia Nixon: The Cults of Demeter and Kore 5. Lin Foxhall: Women's Ritual and Men's Work in Ancient Athens 6. Sarah B. Pomeroy: Women's Identity and the Family in the Classical Polis 7. Voula Lambropoulou: Some Pythagorean Female Virtues 8. Helen King: Self-help, Self-knowledge: In Search of the Patient in Hippocratic Gynaecology 9. Danielle Gourevitch: Women who suffer from a man's Disease: the Example of Satyriasis and the debate on Affections specific to the Sexes 10. Mary Beard: Re-reading (Vestal) Virginity 11. Mireille Corbier: Male Power and Legitimacy through Women: the Domus Augusta under the Julio Claudians 12. Liisa Savunen: Women and Elections in Pompeii 13. Susan H. Braund: A Woman's Voice? - Laronia's Role in Juvenal Satire 2 14. Elaine Fantham: Aemilia Pudentilla: of the Wealthy Widow's Choice 15. Anna Wilson: Female Sanctity in the Greek Calendar: the Synaxarion of Constantinople 16. Froma Zeitlin: Signifying the Difference: The Myth of Pandora Bibliography

GOR010093686
Women in Antiquity: New Assessments by Edited by Richard Hawley
Edited by Richard Hawley
Used - Good
Hardback
Taylor & Francis Ltd
1995-10-19
292
0415113687
9780415113687
N/A
Book picture is for illustrative purposes only, actual binding, cover or edition may vary.
The book has been read but remains in clean condition. All pages are intact and the cover is intact. Some minor wear to the spine.