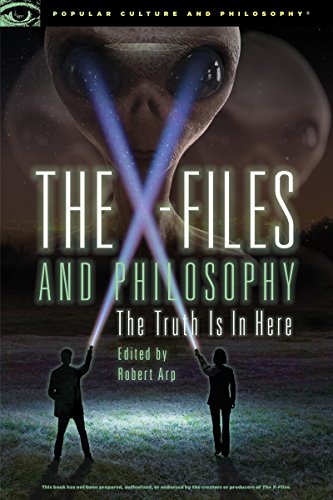 The X-Files and Philosophy
by Edited by Robert Arp

The X-Files and Philosophy Summary

The X-Files and Philosophy: The Truth Is in Here by Edited by Robert Arp

In The X-Files and Philosophy, thirty-six fearless philosophers seek for the truth which is out there, in here, at least somewhere, or (as the postmodernists claim) nowhere. One big issue is whether the weird and unexplained happenings, including the existence of entities unknown to traditional science, might really exist. And if they did, what would be the proper way to behave towards them? Some of these entities seem to flout conventional laws of nature-but perhaps we need to allow for different, as yet undiscovered, laws. If such fabulous entities really exist, what do we owe them? And if they don't exist, why do we imagine they do?
In The X-Files, regular science is represented by Scully and usually turns out to be wrong, while open-minded credulity or pseudoscience is represented by Mulder and usually turns out to be right, or at least somehow on the right track. Scully demands objective, repeatable evidence, and she usually gets it, with Mulder's help, in astounding and unwelcome ways. What lessons should we take from the finding of The X-Files that respectable science is nearly always wrong and outrageous speculative imagination nearly always right?

About Edited by Robert Arp

GOR010094078
The X-Files and Philosophy: The Truth Is in Here by Edited by Robert Arp
Edited by Robert Arp
Used - Very Good
Paperback
Open Court Publishing Co ,U.S.
2017-06-01
288
0812699580
9780812699586
N/A
Book picture is for illustrative purposes only, actual binding, cover or edition may vary.
This is a used book - there is no escaping the fact it has been read by someone else and it will show signs of wear and previous use. Overall we expect it to be in very good condition, but if you are not entirely satisfied please get in touch with us.