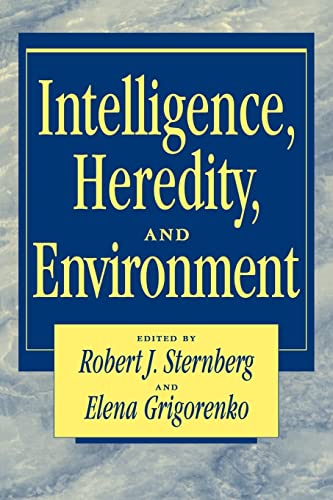 In Stock
$13.99
+10% GST
The nature versus nurture debate regarding intelligence is not as clearly drawn as it was 10 years ago. Although not resolved, it has been significantly refined. Intelligence, Heredity and Environment provides a comprehensive, balanced, diverse, and current survey of theory and research on human intelligence.
Very Good
Only 3 left

The debate over nature versus nurture in relation to intelligence is not as clearly drawn as it was ten years ago, when geneticists claimed that intelligence is innate, while environmentalists claimed that culture is the major determining factor. Although the debate has not been resolved, it has been significantly refined. Robert Sternberg and Elena Grigorenko address the roles and interaction of nature and nurture in Intelligence, Heredity and Environment. This book provides a comprehensive, balanced, current survey of theory and research on the origins and transmission of human intelligence. The book is unique in the diversity of viewpoints it presents, and its inclusion of the very most recent theories and findings. It highlights the search for genes associated with specific cognitive abilities, interactionist theories, cultural relativism, educational strategies, developmental perspectives, and fallacies of previous intelligence research.

"...the book succeeds admirably in its stated purpose. It provides a convenient and much-needed update that people in the various fields touched by the nature-nurture debate are bound to find informative." Susana Urbina, Contemporary Psychology
"If this book is any indication of what is to come we can look forward to a very exciting century in the study of intellectual development." David Henry Feldman, Roeper Review
"Although the various theories and proposals for greater diversity in intellectual gifts and talents, for greater social and cultural impact on these capabilities, and for dynamic, developmental approaches to questions of intellectual development have a long way to go in scientific terms, they have begun to chart the direction the field must take in its second century. Intelligence, Heredity, and Environment captures this period of transition with unprecedented fairness, clarity, balance, and quality." David Henry Feldman, Roeper Review
"Wahlsten and Gottlieb succeed in convincing the reader (at least this reader!) that however sophisticated a tour de force behavior genetics is, it fundamentally distorts the reality of how genes work." David Henry Feldman, Roeper Review

GOR001950380
Intelligence, Heredity and Environment by Edited by Robert J. Sternberg (Yale University, Connecticut)
Edited by Robert J. Sternberg (Yale University, Connecticut)
Used - Very Good
Paperback
Cambridge University Press
1997-01-28
632
052146904X
9780521469043
N/A
Book picture is for illustrative purposes only, actual binding, cover or edition may vary.
This is a used book - there is no escaping the fact it has been read by someone else and it will show signs of wear and previous use. Overall we expect it to be in very good condition, but if you are not entirely satisfied please get in touch with us.