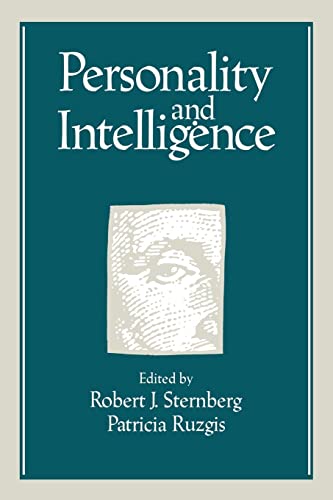 Out of Stock
$16.49
inc. GST
Including work from prominent researchers such as Eysenck, Baltes, Dwek, Cantor, Ford, Smirnov, and Salovey, the 1994 book comprises an overview of the current state of the literature on the integration of the emotional and cognitive sides of a person's life.
Very Good
Only 0 left

Motivated by their belief that the most interesting work on intelligence is now being done at the interface of intelligence and personality, Robert Sternberg and Patricia Ruzgis have collected a body of essays exploring the interconnections and interdependencies between these two constructs. The essays selected for this 1994 volume form a history of the fields of intelligence and personality, from the period of 'grand theories', in which researchers sought to formulate overarching theories of the constructs as a whole, to the psychometric approach of factor analysis, to the development of situational and domain-specific theories, and finally to current research on person-situation interactions. Including work from prominent researchers such as Eysenck, Baltes, Dwek, Cantor, Ford, Smirnov, and Salovey, the book comprises an overview of the current state of the literature on the integration of the emotional and cognitive sides of a person's life.

"...a well-edited work; its papers and bibliographies will be useful to graduate students and professional researchers." Choice
"Any attempt to bring these two diverse areas together in an edited volume is an ambitious undertaking, and the results, not surprisingly, vary from chapter to chapter. Fortunately, the chapters vary from very good to outstanding...I found all of the chapters extremely well written and informative." Gary Collier, The American Journal of Psychology
"...the chapters in this book are...rich in reviews, cogently argued and easily understood." Mike Anderson, The Times Higher Education Supplement
"...should be of interest to graduate students and professionals in the areas of personality, social, developmental, cognitive, cross-cultural, and educational psychology....This book is a useful source of ideas and proves that there are many connections to be drawn between personality and intelligence." Barbara A. Woike, Contemporary Psychology

GOR005361938
Personality and Intelligence by Edited by Robert J. Sternberg (Yale University, Connecticut)
Edited by Robert J. Sternberg (Yale University, Connecticut)
Used - Very Good
Paperback
Cambridge University Press
1994-04-29
352
0521428351
9780521428354
N/A
Book picture is for illustrative purposes only, actual binding, cover or edition may vary.
This is a used book - there is no escaping the fact it has been read by someone else and it will show signs of wear and previous use. Overall we expect it to be in very good condition, but if you are not entirely satisfied please get in touch with us.