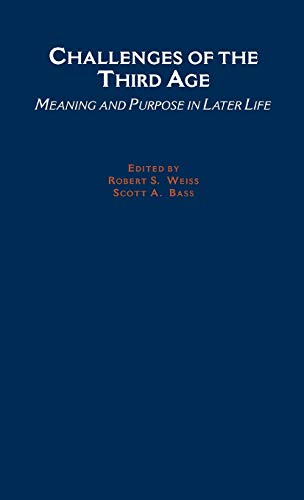 Challenges of the Third Age
by Edited by Robert S. Weiss

Out of Stock
$49.99
inc. GST
This volume addresses the issues of the Third Age - that time after retirement when financial stability and reduced obligations to others, together, allow for freedom, and good health makes it possible to enjoy that freedom. Questions are responded to by scholars in the field of aging, some themselves in the Third Age.
Good
Only 0 left

Challenges of the Third Age Summary

Challenges of the Third Age: Meaning and Purpose in Later Life by Edited by Robert S. Weiss

The newly retired are entering a time of life that is virtually uncharted, a time in which they are free from social expectations and, to a large extent, from obligations to others. Life's meanings are no longer provided by work and family. Instead, men and women have the freedom, and the need, to find new activities that they can imbue with meaning. The term, "Third Age" has been given to this time of life during which for most there is relatively good health, financial stability, and reduced family obligations. The problems and possibilities of this "Third Age" serve as the material for this book. How do older people decide how to deploy their continued vitality, now that they are free from the demands of work and children? How do they find meaning in daily life? In this book, scholars from several disciplines consider the way in which meaning can be found in this important stage of later life. They discuss sociological, psychological, and religious determinants of responses to the challenges of finding meaningful activity after retirement.

About Edited by Robert S. Weiss

Robert S. Weiss is Senior Fellow and Emeritus Professor of Sociology at the Gerontology Institute, University of Massachusetts, Boston. Scott A. Bass is Dean of the Graduate School, Vice Provost for Research, and Distinguished Professor at the University of Maryland, Baltimore County.

Introduction; 1. Holding onto Meaning through the Life Cycle; 2. Social Sources of Meaning in Later Life; 3. The Third Age; 4. Aging, Place, and Meaning in the Face of Changing Circumstances; 5. The Changing Meaning of Aging; 6. Bringers of Allah: The Druse Elders; 7. Aging, Intimate Relationships, and Life Story among Gay Men; 8. Looking for Meaning in a Life's Experience; 9. The Search for Meaning in Later Years: the Views of a Seventy-Four-Year Old Gerontological Social Worker; Epilogue: Concluding Note on Meaning and the Possibility of Productive Aging

GOR010234406
Challenges of the Third Age: Meaning and Purpose in Later Life by Edited by Robert S. Weiss
Edited by Robert S. Weiss
Used - Good
Hardback
Oxford University Press Inc
2001-12-31
272
0195133390
9780195133394
N/A
Book picture is for illustrative purposes only, actual binding, cover or edition may vary.
The book has been read but remains in clean condition. All pages are intact and the cover is intact. Some minor wear to the spine.