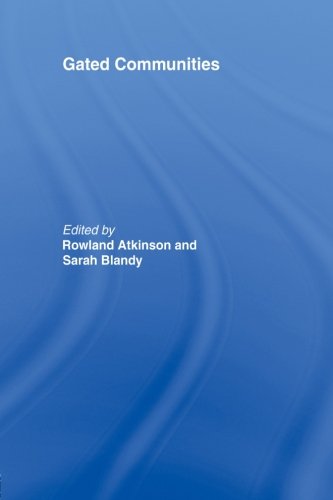 This informative volume gathers contemporary accounts of the growth, influences on, and impacts of so-called gated communities, developments with walls, gates, guards and other forms of surveillance.

While gated communities have become a common feature of the urban landscape in South Africa, Latin and North America, it is also clear that there is now significant interest in gated living in the European and East Asian urban context. The chapters in this book investigate issues and communities such as:

These illustrative chapters enable the reader to understand more about the social and economic forces that have lead to gating, the ways in which gated communities are managed, and their wider effects on both residents and those living outside the gates.

This book was previously published as a special issue of the journal Housing Studies.

GOR009728864
Gated Communities: International Perspectives by Edited by Rowland Atkinson (University of Glasgow, UK)
Edited by Rowland Atkinson (University of Glasgow, UK)
Used - Very Good
Paperback
Taylor & Francis Ltd
2007-12-04
186
0415463793
9780415463799
N/A
Book picture is for illustrative purposes only, actual binding, cover or edition may vary.
This is a used book - there is no escaping the fact it has been read by someone else and it will show signs of wear and previous use. Overall we expect it to be in very good condition, but if you are not entirely satisfied please get in touch with us.