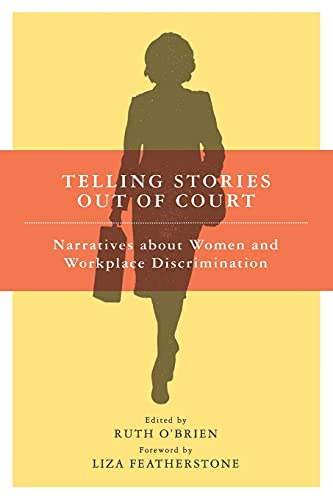 Telling Stories Out of Court
by Edited by Ruth O'Brien

"Few of the countless real-life stories of workplace discrimination suffered by men and women every day are ever told publicly. This book boldly and eloquently rights that wrong, going where no plaintiff testimony could ever dare because these stories...

Telling Stories Out of Court Summary

Telling Stories Out of Court: Narratives about Women and Workplace Discrimination by Edited by Ruth O'Brien

"Few of the countless real-life stories of workplace discrimination suffered by men and women every day are ever told publicly. This book boldly and eloquently rights that wrong, going where no plaintiff testimony could ever dare because these stories are often too raw, honest, ambiguous, and nuanced to be told in court or reported in a newspaper."-from the Foreword

Telling Stories Out of Court reaches readers on both an intellectual and an emotional level, helping them to think about, feel, and share the experiences of women who have faced sexism and discrimination at work. It focuses on how the federal courts interpreted Title VII of the Civil Rights Act of 1964. Offering insights that law texts alone cannot, the short stories collected here-all but two written for this volume-help readers concentrate on the emotional content of the experience with less emphasis on the particulars of the law. Grouped into thematic parts titled "In Their Proper Place," "Unfair Treatment," "Sexual Harassment," and "Hidden Obstacles," the narratives are combined with interpretive commentary and legal analysis that anchor the book by revealing the impact this revolutionary law had on women in the workplace.

At the same time, the stories succeed on their own terms as compelling works of fiction, from "LaKeesha's Job Interview," in which a woman's ambition to move from welfare to work faces an ironic obstacle, to "Plato, Again," in which a woman undergoing treatment for cancer finds her career crumble under her, to "Vacation Days," which takes the reader inside the daily routine of a nanny who works at the whim of her employer.

Telling Stories Out of Court Reviews

"Telling Stories Out of Court combines gripping fiction with expert legal commentary to expose the law and everyday realities of workplace discrimination. This unique and wonderful collection gives voice to the experience of discrimination, while simultaneously illustrating how much the law has accomplished and how much is yet to be done." -- Joanna L. Grossman, Hofstra University School of Law

About Edited by Ruth O'Brien

Ruth O'Brien is Professor and Executive Officer of the Political Science PhD Program at the Graduate Center of the City University of New York. Her books include Bodies in Revolt: Gender, Disability, and a Workplace Ethic of Care; Voices from the Edge: Narratives about the Americans with Disabilities Act; and Crippled Justice: The History of Modern Disability Policy in the Workplace. Liza Featherstone is a journalist and the author of Selling Women Short: The Landmark Battle for Workers' Rights at Wal-Mart.

GOR010103942
Telling Stories Out of Court: Narratives about Women and Workplace Discrimination by Edited by Ruth O'Brien
Edited by Ruth O'Brien
Used - Very Good
Paperback
Cornell University Press
2008-08-07
264
0801473578
9780801473579
N/A
Book picture is for illustrative purposes only, actual binding, cover or edition may vary.
This is a used book - there is no escaping the fact it has been read by someone else and it will show signs of wear and previous use. Overall we expect it to be in very good condition, but if you are not entirely satisfied please get in touch with us.