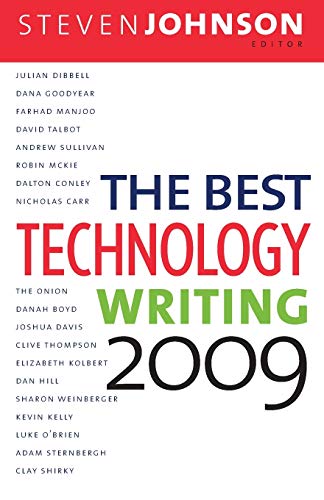 The Best Technology Writing 2009
by Edited by Steven Johnson

Out of Stock
$14.99
inc. GST
A collection of essays that announces a fresh brand of technology journalism, deeply immersed in the fascinating complexity of digital life.
Very Good
Only 0 left

The Best Technology Writing 2009 by Edited by Steven Johnson

"The ubiquity of the digital lifestyle has forced us to write and think about technology in a different way."-Steven Johnson

In his Introduction to this beautifully curated collection of essays, Steven Johnson heralds the arrival of a new generation of technology writing. Whether it is Nicholas Carr worrying that Google is making us stupid, Dana Goodyear chronicling the rise of the cellphone novel, Andrew Sullivan explaining the rewards of blogging, Dalton Conley lamenting the sprawling nature of work in the information age, or Clay Shirky marveling at the "cognitive surplus" unleashed by the decline of the TV sitcom, this new generation does not waste time speculating about the future. Its attitude seems to be: Who needs the future? The present is plenty interesting on its own.

Packed with sparkling essays culled from print and online publications, The Best Technology Writing 2009 announces a fresh brand of technology journalism, deeply immersed in the fascinating complexity of digital life.

"A fascinating collection... these essays will certainly resonate with you for quite some time, encouraging you to discover some gems hidden in the crevices of the Internet"-Edward Valauskas, First Monday

About Edited by Steven Johnson

Steven Johnson is the author of six books, including the recent bestsellers The Invention of Air, The Ghost Map, and Everything Bad Is Good for You. He writes for the New York Times Magazine, Wired, the Guardian, Discover, and other publications, and has made numerous appearances on Charlie Rose, The Daily Show, and The Colbert Report. He lives in Brooklyn.

GOR003046460
The Best Technology Writing 2009 by Edited by Steven Johnson
Edited by Steven Johnson
The Best Technology Writing
Used - Very Good
Paperback
Yale University Press
2009-10-02
240
0300154100
9780300154108
N/A
Book picture is for illustrative purposes only, actual binding, cover or edition may vary.
This is a used book - there is no escaping the fact it has been read by someone else and it will show signs of wear and previous use. Overall we expect it to be in very good condition, but if you are not entirely satisfied please get in touch with us.