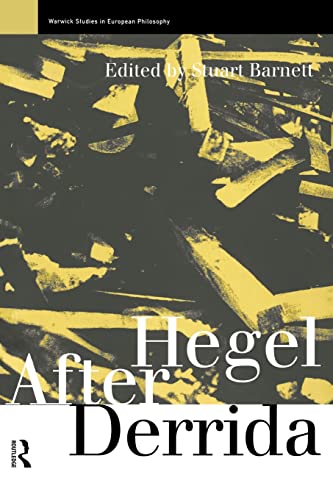 Hegel After Derrida
by Edited by Stuart Barnett

Out of Stock
$76.99
inc. GST
An insight into the importance of Hegel, Derrida's work on Hegel and the foundations of postmodern and deconstructionist thought. For those concerned with the work of Derrida and Hegel and anyone seeking insight into the themes of deconstruction. In the WARWICK STUDIES IN EUROPEAN PHILOSOPHY series.
Very Good
Only 0 left

Hegel After Derrida by Edited by Stuart Barnett

Hegel After Derrida provides a much needed insight not only into the importance of Hegel and the importance of Derrida's work on Hegel, but also the very foundations of postmodern and deconstructionist thought. It will be essential reading for all those engaging with the work of Derrida and Hegel today and anyone seeking insight into some of the basic but neglected themes of deconstruction.

"Hegel After Derrida" is the first careful consideration of Derrida's deep and constant encounter with Hegel. Barnett's skillful volume will be required reading for all scholars of Derrida and of the contemporary scene."
-Geoffrey Hartman, Yale University
"Barnett's book, "Hegel After Derrida provides insight into the importance of German philosopher Georg Wilhelm Friedrich Hegel (1770-1831) and contemporary French philosopher Jacques Derrida (1930). The new book Hegel After Derrida is the first study to address these "complex issues and it has received critical acclaim from leading scholars."
-New Britain, CT "Herald
"In the new book, Prof. Barnett and 10 American and European scholars of continental philosophy rigorously examine Hegel and Derrida... In addition to this own conributions to the text, Prof. Barnett coordinated the international effort to assemble the work for Routledge Publishers, one of the world's foremost producers of important scholarly publications."
-"Valley News, West Hartford, CT 5/99
"The most ambitious and the most textually proximate to Derrida's work on Hegel in "Glas... Barnett's collection goes the farthest of anyone's to date to this brink."
-Irene E. Harvey, Pennsylvania State University

Introduction. Hegel Before Derrida Part One: Hegel After Derrida Robert Bernasconi Hegel at the Court of the Ashanti John H. Smith Of Spirit(s) and Will(s) Jean-Luc Nancy The Surprise of the Event Werner Hamacher (The End of Art with the Mask) Stuart Barnett Eating My God Part Two: After Hegel After Derrida Suzanne Gearhart The Remants of Philosophy: Psychoanalysis After Glas Andrzej Warminski Hegel/Marx: Consciousness and Life Part Three: Reading Glas Simon Critchley A Commentary Upon Derrida's Reading of Hegel in Glas Heinz Kimmerle On Derrida's Hegel Interpretation Kevin Thompson Hegelian Dialectic and the Quasi-Transcendental in Glas Henry Sussman Hegel, Glas, and the Broader Modernity Select Bibliography Contributors.

GOR005272388
Hegel After Derrida by Edited by Stuart Barnett
Edited by Stuart Barnett
Warwick Studies in European Philosophy
Used - Very Good
Paperback
Taylor & Francis Ltd
1998-02-26
368
0415171059
9780415171052
N/A
Book picture is for illustrative purposes only, actual binding, cover or edition may vary.
This is a used book - there is no escaping the fact it has been read by someone else and it will show signs of wear and previous use. Overall we expect it to be in very good condition, but if you are not entirely satisfied please get in touch with us.