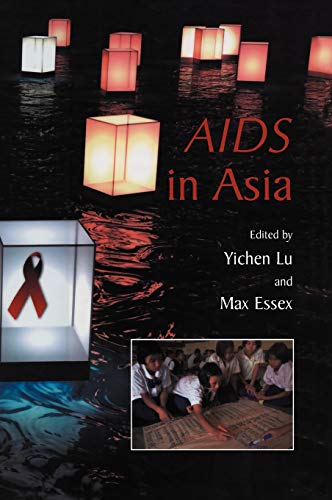 AIDS in Asia
by Edited by Yichen Lu

Out of Stock
$93.99
inc. GST
Asia has become the battle ground for the war against HIV/AIDS. This book provides information on the diagnosis, treatment, care, prevention and impact of AIDS. It is intended for the public health professionals and researchers working in this field.
Very Good
Only 0 left

AIDS in Asia by Edited by Yichen Lu

Asia has become the new battle ground for the war against HIV/AIDS. The magnitude of the potential public health problems caused by AIDS in this populous continent may become a catastrophic disaster. A 10% rate of prevalence of HIV-1 in India and China alone would mean more than 200 million people are infected with HIV.
AIDS in Asia is useful as a comprehensive, up-to-date AIDS reference book for public health and medical professionals. This volume provides concrete information on the diagnosis, treatment, care, prevention and impact of AIDS. Part I contains 'Snapshots of HIV/AIDS in Asia.' Countries and regions included in this section are: Thailand, India, China, Japan, Vietnam, Laos, Cambodia, Myanmar, Malaysia, Indonesia, the Philippines, Pakistan, Nepal, Sri Lanka, Hawaii and the Pacific Islands, Hong Kong and Taiwan. Part II addresses the molecular epidemiology of HIV/AIDS. Part III deals with the diagnosis, surveillance and projected scenarios of the AIDS epidemic. Part IV outlines prevention efforts and treatment options. Part V provides an overview of the ongoing collaborative efforts involved in several different nations in the worldwide war against AIDS.
This volume will be invaluable to all the public health professionals and researchers working in this field.

"...the book is a useful addition to the HIV/AIDS literature."

"AIDS in Asia offers a comprehensive, interesting overview of the epidemic there and of general issues that will influence its progression."

The Journal of the American Medical Association, Book Review, 293:15

"The underlying theme of this excellent book is the prospect of an HIV/AIDS epidemic in Asia and the steps that have been and must be taken to prevent the spread of this virus and disease in an area that contains about 60 percent of the world's population. Some 115 international scientists and public health officials, all directly involved in AIDS/HIV-associated work, have contributed 39 chapters....As evidenced by the section titles, the book is well organized. It is also well edited; the varied nationalities of the contributors are not reflected in the writing style. Each chapter has a list of references, and the book benefits from a good index. Summing Up: Recommended. All levels. (R. S. Kowalczyk, Choice, January 2005

"AIDS in Asia will be an extremely valuable resource as leaders and stakeholders move to set up integrated HIV/AIDS control programmes. It will help them to enlist the latest evidence in support of fair treatment for the vulnerable, which is the foundation of all adequate public health policy."
(from the Foreword by Lee Jong-Wook, Director-General of the World Health Organization)

GOR010243828
AIDS in Asia by Edited by Yichen Lu
Edited by Yichen Lu
Used - Very Good
Hardback
Springer Science+Business Media
2004-06-01
594
0306484838
9780306484834
N/A
Book picture is for illustrative purposes only, actual binding, cover or edition may vary.
This is a used book - there is no escaping the fact it has been read by someone else and it will show signs of wear and previous use. Overall we expect it to be in very good condition, but if you are not entirely satisfied please get in touch with us.