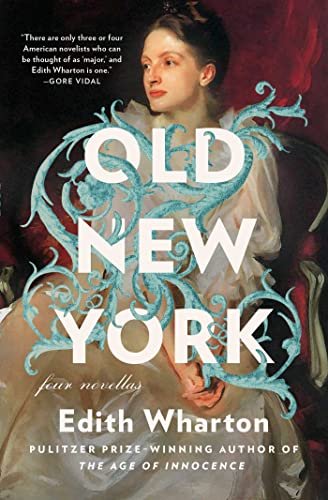 From the Pulitzer Prize-winning author of The Age of Innocence come four masterly short novels of New York during the 19th century, revealing with subtle irony the customs and tribal codes that ruled Society.

Edith Wharton made the world of Old New York her own, the wealthy high society so powerfully depicted in these three elegantly ironic novels. Revolving around the marriage question, they explore the dilemma of women and men held within the rigid bounds of social convention. Thus in The House of Mirth, the novel that first brought Edith Wharton to fame, the complex, poignant heroine Lily Bart must either break away and find a more meaningful existence, or become a part of the superficial values of the nouveaux riches; in The Custom of the Country, the energetic and ambitious Undine Spragg works her way to wealth anti power through a succession of marriages; while Newland Archer in The Age of Innocence is caught in an agony of indecision: whether he should choose the duty of a socially approved marriage, or the love of a woman frowned upon by 'decent' society.
Gore Vidal

There are only three or four American novelists who can be thought of as "major" -- and Edith Wharton is one.

America's most famous woman of letters, and the first woman to win the Pulitzer Prize, Edith Wharton was born into one of the last "leisured class" families in New York City, as she put it, in 1862. Educated privately, she was married to Edward Wharton in 1885, and for the next few years, they spent their time in the high society of Newport (Rhode Island), then Lenox (Massachusetts) and Europe. It was in Europe that Wharton first met Henry James, who was to have a profound and lasting influence on her life and work. Wharton's first published book was a work of nonfiction, in collaboration with Ogden Codman, The Decoration of Houses (1897), but from early on, her marriage had been a source of distress, and she was advised by her doctor to write fiction to relieve her nervous tension. Wharton's first short stories appeared in Scribners Magazine, and though she published several volumes of fiction around the turn of the century, including The Greater Inclination (1899), The Touchstone (1900), Crucial Instances (1901), The Valley of Decision (1902), Sanctuary (1903), and The Descent of Man and Other Stories (1904), it wasn't until 1905, with the publication of the bestselling The House of Mirth, that she was recognized as one of the most important novelists of her time for her keen social insight and subtle sense of satire. In 1906, Wharton visited Paris, which inspired Madame de Treymes (1907), and made her home there in 1907, finally divorcing her husband in 1912. The years before the outbreak of World War I represent the core of her artistic achievement, when Ethan Frome (1911 ), The Reef (1912), and The Custom of the Country (1913) were published. During the war, she remained in France organizing relief for Belgian refugees, for which she was later awarded the Legion of Honor. She also wrote two novels about the war, The Marne (1918) and A Son at the Front (1923), and continued, in France, to write about New England and the Newport society she had known so well in Summer (1917), the companion to Ethan Frome, and The Age of Innocence (1920), for which she won the Pulitzer Prize. Wharton died in France in 1937. Her other works include Old New York (1924), The Mother's Recompense (1925), The Writing of Fiction (1925), The Children (1928), Hudson River Bracketed (1929), and her autobiography, A Backward Glance (1934).
GOR003473558
9780020383147
0020383142
Old New York: Four Novellas by Edith Wharton
Edith Wharton
Used - Very Good
Paperback
Simon & Schuster
1995-03-01
320
N/A
Book picture is for illustrative purposes only, actual binding, cover or edition may vary.
This is a used book - there is no escaping the fact it has been read by someone else and it will show signs of wear and previous use. Overall we expect it to be in very good condition, but if you are not entirely satisfied please get in touch with us
Trustpilot