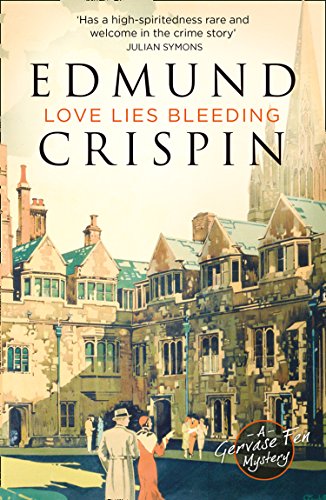 As inventive as Agatha Christie, as hilarious as P.G. Wodehouse - discover the delightful detective stories of Edmund Crispin. Crime fiction at its quirkiest and best.

As inventive as Agatha Christie, as hilarious as P.G. Wodehouse - discover the delightful detective stories of Edmund Crispin. Crime fiction at its quirkiest and best.

Castrevenford school is preparing for Speech Day and English professor and amateur sleuth Gervase Fen is called upon to present the prizes. However, the night before the big day, strange events take place that leave two members of staff dead. The Headmaster turns to Professor Fen to investigate the murders.

While disentangling the facts of the case, Mr Fen is forced to deal with student love affairs, a kidnapping and a lost Shakespearean manuscript. By turns hilarious and chilling, Love Lies Bleeding is a classic of the detective genre.

"A master of the whodunit...he combines a flawless plot, witty dialogue, and a touch of hilarity" (New York Times)

"Never has Mr Crispin been in such good form" (Observer)

Robert Bruce Montgomery was born in Buckinghamshire in 1921, and was a golden age crime writer as well as a successful concert pianist and composer. Under the pseudonym Edmund Crispin, he wrote nine detective novels and 42 short stories, combining farcical situations with literary references and sharply observed characterisation. His professional film scores included the well-known scores for the Carry On series. Montgomery graduated from St. John's College, Oxford in 1943 and was part of a famous literary circle including Kingsley Amis and Philip Larkin. In addition to his reputation as a leader in the field of mystery genre, he was the regular crime-fiction reviewer for the Sunday Times from 1967 and contributed to many periodicals and newspapers and edited science-fiction anthologies. After the golden years of the 1950s he retired from the limelight to live out a hermetic existence in Totnes in Devonshire until his death in 1978.

GOR007104906
Love Lies Bleeding (A Gervase Fen Mystery) by Edmund Crispin
Edmund Crispin
A Gervase Fen Mystery
Used - Very Good
Paperback
HarperCollins Publishers
2015-06-04
272
0008124159
9780008124151
N/A
Book picture is for illustrative purposes only, actual binding, cover or edition may vary.
This is a used book - there is no escaping the fact it has been read by someone else and it will show signs of wear and previous use. Overall we expect it to be in very good condition, but if you are not entirely satisfied please get in touch with us.