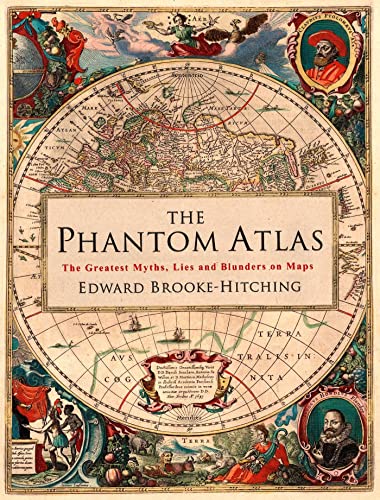 The Phantom Atlas
by Edward Brooke-Hitching

In Stock
$24.49
inc. GST
The astonishing story of the maps and atlases throughout history that got it completely wrong
Very Good
Only 1 left

The Phantom Atlas: The Greatest Myths, Lies and Blunders on Maps by Edward Brooke-Hitching

The Phantom Atlas is an atlas of the world not as it ever existed, but as it was thought to be. These marvellous and mysterious phantoms - non-existent islands, invented mountain ranges, mythical civilisations and other fictitious geography - were all at various times presented as facts on maps and atlases. This book is a collection of striking antique maps that display the most erroneous cartography, with each illustration accompanied by the story behind it.

Exploration, map-making and mythology are all brought together to create a colourful tapestry of monsters, heroes and volcanoes; swindlers, mirages and murderers. Sometimes the stories are almost impossible to believe, and remarkably, some of the errors were still on display in maps published in the 21st century. Throughout much of the 19th century more than 40 different mapmakers included the Mountains of Kong, a huge range of peaks stretching across the entire continent of Africa, in their maps - but it was only in 1889 when Louis Gustave Binger revealed the whole thing to be a fake. For centuries, explorers who headed to Patagonia returned with tales of the giants they had met who lived there, some nine feet tall. Then there was Gregor MacGregor, a Scottish explorer who returned to London to sell shares in a land he had discovered in South America. He had been appointed the Cazique of Poyais, and bestowed with many honours by the local king of this unspoiled paradise. Now he was offering others the chance to join him and make their fortune there, too - once they had paid him a bargain fee for their passage...

The Phantom Atlas is a beautifully produced volume, packed with stunning maps and drawingsof places and people that never existed. The remarkable stories behind them all are brilliantly told by Edward Brooke-Hitching in a book that will appeal to cartophiles everywhere.

`A bonkers book...Highly recommended' -- Andrew Marr
`A spectacular, enjoyable and eye-opening read... A wonderful book, with beautiful illustrations throughout' -- Jonathan Ross
`Beautifully illustrated...brain-boggling...an excursion into the minds of men imagining an as yet uncharted world' * Spectator *
`This intriguing book...shows how places that aren't there can endure, sometimes for centuries, once a map-maker has inked them in' * The Times *
`Beautiful... Brooke-Hitching [has] an eye for a good story and his book is gloriously illustrated with ancient mistaken maps, each accompanied by a thoroughly researched tale of the men whose errors led to them.' * Daily Express *
`Extraordinary' * Historia Magazine *
`Excellent... Arranged alphabetically in fifty-eight short chapters, with lavish deployment of illustrations, the book provides a captivating chronicle of our battle with ignorance' * Literary Review *
`Unreservedly recommended' * The Monocle *
`From the magnetic mountain at the north pole to Australia's inland sea, Edward Brooke-Hitching charts five centuries of misrepresentative maps.' * The Guardian *
`A rich selection... [that] shows how lively minds made use of limited knowledge, but also how rumour, guesswork and downright lies can persist in the scholarly imagination.' * The Economist *
`One of the most beautiful books I've ever seen in my life...full of fascinating quirky things.' -- Jen Campbell, author Weird Things Customers Say in Bookshops
`The fascination and beauty of maps both emerge clearly in this well-written, witty and thoughtful book...this is a spirited and enjoyable study' * Standpoint *
`Exquisitely produced... Gorgeous illustrations of countries and islands that were once thought to exist...For any fans of maps this is a must' * The Australian *
'Fascinating ... and beautifully illustrated' -- Rosamund Urwin * Evening Standard *
'The Phantom Atlas describes some 50 "myths, lies and blunders" and illustrates them in delightful detail...deserve[s] a place on the coffee table, but only after it's been read: there is as much to absorb as to see.' -- John Ure * Country Life *

The son of an antiquarian book dealer, Edward Brooke-Hitching became an award-winning documentary director making films that examine the eccentric side of British life. He lives in London.

GOR008004337
The Phantom Atlas: The Greatest Myths, Lies and Blunders on Maps by Edward Brooke-Hitching
Edward Brooke-Hitching
Used - Very Good
Hardback
Simon & Schuster Ltd
2016-11-01
256
1471159450
9781471159459
N/A
Book picture is for illustrative purposes only, actual binding, cover or edition may vary.
This is a used book - there is no escaping the fact it has been read by someone else and it will show signs of wear and previous use. Overall we expect it to be in very good condition, but if you are not entirely satisfied please get in touch with us.