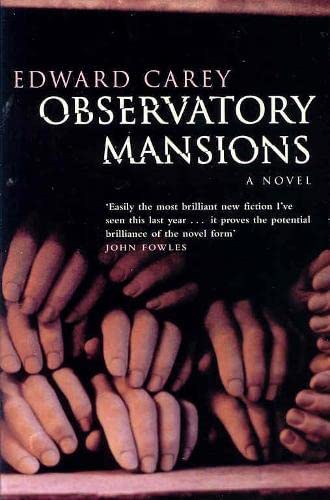 A Mervyn Peak for the new century. 'Carey is nothing short of a genius' Wendy Perriam

**A MERVYN PEAKE FOR THE NEW CENTURY**

Observatory Mansions was once the Orme family's ancestral home. Now it is a crumbing apartment block, stranded on a traffic island and peopled with eccentrics.

Alice Orme never stirs from her bed, her husband lives in his old armchair, and Francis, their son, practises his own art of stillness as a human statue in the centre of the decaying city. He lives by his Law of White Gloves, never touching anything without their protection, and collects items for his secret exhibition - items stolen, not because of any monetary worth, but because they are treasured by the owners.

Edward Carey's debut is a novel of immense originality - a strangely haunting landscape occupied by compelling and unforgettable characters.

'Edward Carey has an imagination of tremendous range and power. He transforms the familiar stuff of life in shapes utterly strange and marvellous. This is a novel of truly startling originality' Patrick McGrath

'A striking debut, not simply for the skill with which it conjures its bizarrerie but for the way it wrings pity from an incredible setting' Times Literary Supplement

Edward Carey was born in 1970. Both his novels, Observatory Mansions and Alva and Irva, are published by Picador. He lives in London and France.

GOR001600754
Observatory Mansions by Edward Carey
Edward Carey
Used - Very Good
Paperback
Pan Macmillan
2001-02-09
368
033039116X
9780330391160
N/A
Book picture is for illustrative purposes only, actual binding, cover or edition may vary.
This is a used book - there is no escaping the fact it has been read by someone else and it will show signs of wear and previous use. Overall we expect it to be in very good condition, but if you are not entirely satisfied please get in touch with us.