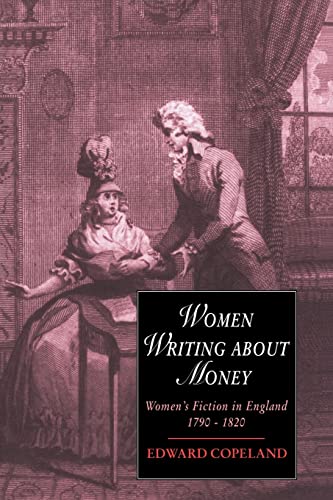 This study addresses a paradox in the lives of women in Jane Austen's time who had no legal access to money yet were held responsible for domestic expenditure. The book translates the fictional money of the novels of Jane Austen's day into the power of contemporary spendable incomes, and from the perspective of what the British pound could buy at the market, the economic lives of women in the novels emerge as part of a general picture of women's economic disability. Through the work of writers such as Austen and Edgeworth, as well as those of magazine fiction, the author examines the professional lives of women authors, their publishers, their profits, and the demands of their reading public. By linking authorship to the economic lives of contemporary women, Women Writing About Money links the fantasy worlds of women's fiction with the social and economic realities of both readers and writers.

'Meticulously researched and solidly written, this study makes an invaluable contribution to the understanding of women's literature.' E. R. Baer, Gustavus Adolphus College
'Enlivened by many illustrations, this study goes beyond Jane Austen and even Maria Edgeworth ... in order to show the linkage between female authorship and the economic realities of the time.' University of California
'Edward Copeland draws on the current work in the history of consumption to illuminate his readings of popular literature.' Eighteenth Century Studies
'Copeland's well-illustrated and deeply-researched study can be enthusiastically recommended to students for the way it skillfully and tenaciously demonstrates the importance of reading what has become canonical writing alongside the popular, but now neglected, literature of its day.' Albion
'This book has considerable critical and scholarly depth in its discussion of the development in Minerva Press novels, from fictions of stark economic liability to visions of economic empowerment to frank celebrations of commercial life.' Studies in English Literature
' Essential reading for students of Austen ... Copeland's book also stimulates interest in a commendably wide range of Austen's contemporaries.' Caroline Gonda, University of Dundee
'Edward Copeland's book is a solid and sensible study of the use and meaning of money in the lives of women as seen in the fiction of female writers. Perhaps the greatest contribution of the book is his discussion and analysis of the complex matrix of attitudes towards the employment of women.' Eighteenth Century Fiction
'Copeland's study is a thoroughly scholarly enterprise, and refreshing in its intimate familiarity with the (often extensive) oeuvres of not only the more prominent respectable authors like Charlotte Smith and Mary Brunton, but the host of now-forgotten Minerva favourites ... I recommend Copeland's study as essential reading for those interest in women's fiction in the Romantic period, and it is especially useful in putting Jane Austen's preoccupation with money into context.' British Journal of Eighteenth-Century Studies
'Copeland ... has undertaken the type of assiduous research that makes Women Writing About Money a fascinating history of the relations between economic details and gender in the period.' Amanda Gilroy, Romanticism

Introduction; 1. The general calamity: the want of money; 2. Gothic economics: the 1790s; 3. The gifts of heaven: consumer power, 1800-1820; 4. Shopping for signs: Jane Austen and the pseudo-gentry; 5. Picturing the heroine; The Lady's Magazine 1770-1820. 6. Fictions of employment: female accomplishments; 7. Writing for money: authors and heroines; Notes; Bibliography; Index.

GOR010205234
Women Writing about Money: Women's Fiction in England, 1790-1820 by Edward Copeland (Pomona College, California)
Edward Copeland (Pomona College, California)
Cambridge Studies in Romanticism
Used - Very Good
Paperback
Cambridge University Press
2004-12-02
312
0521616166
9780521616164
N/A
Book picture is for illustrative purposes only, actual binding, cover or edition may vary.
This is a used book - there is no escaping the fact it has been read by someone else and it will show signs of wear and previous use. Overall we expect it to be in very good condition, but if you are not entirely satisfied please get in touch with us.