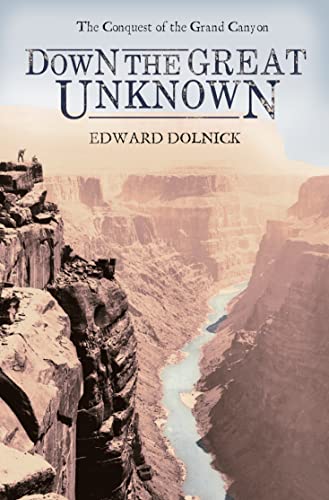 Down the Great Unknown
by Edward Dolnick

The epic adventures of the first white men to explore the Grand Canyon, the last unmapped region of the United States.

Down the Great Unknown Summary

Down the Great Unknown by Edward Dolnick

The epic adventures of the first white men to explore the Grand Canyon, the last unmapped region of the United States.

By 1869, the map of the United States had long since been filled in. Only one mystery remained; an immense area of the south-west, larger than any state in the union and any country in Europe, remained unexplored.

On May 24 1869 a one-armed Civil War veteran named John Wesley Powell and a ragtag band of nine men set out down the river to resolve the mystery. Three months later, defying premature reports of their deaths, six of the men emerged to tell the tale. Their expedition was the last epic adventure on the American continent.

They were the first white men to explore the Grand Canyon, the first of any race to brave the Colorado's ferocious and deadly rapids, and the first to map and measure the area, the ultimate American landscape.

Powell instantly became a national hero and a star of the lecture circuit, enthralling audiences with vividly painted stories of a hostile and alien environment.

This was wild adventure, but it was also a journey with a practical purpose. Powell furthered the cause of modern science, seeing the Grand Canyon as a geological textbook which supported Darwin's new theories about the unthinkably ancient nature of the earth.

Edward Dolnick was chief science writer at the Boston Globe and has also written about science for publications such as The New York Times Magazine and Atlantic.

GOR002676174
Down the Great Unknown by Edward Dolnick
Edward Dolnick
Used - Very Good
Paperback
HarperCollins Publishers
2003-04-22
320
0006532233
9780006532231
N/A
Book picture is for illustrative purposes only, actual binding, cover or edition may vary.
This is a used book - there is no escaping the fact it has been read by someone else and it will show signs of wear and previous use. Overall we expect it to be in very good condition, but if you are not entirely satisfied please get in touch with us.