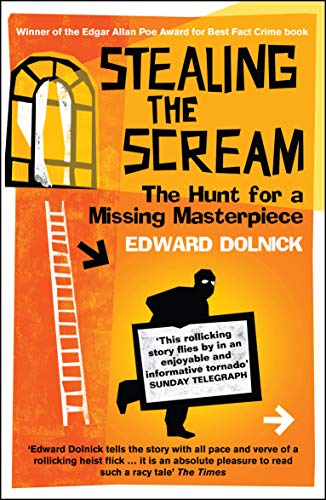 Stealing the Scream
by Edward Dolnick

Used Price
$30.99
inc. GST
Free Shipping in Australia
Two men in a stolen car skid to a halt in front of Norway's National Gallery. Minutes later, they roar off with Edvard Munch's work. In desperation, Norwegian police call on the detective - Scotland Yard's enigmatic, brilliant Charley Hill. The hunt for The Scream will either cap his career or end in a fiasco that will dog him forever.
Reviews:
Trustpilot
Very Good Good

Stealing the Scream: The Hunt for a Missing Masterpiece by Edward Dolnick

The incredible story of the theft of a great painting and the brilliant detective who gets it back. On a frozen February morning in 1994, two men in a stolen car skidded to a halt in front of Norway?s national art museum. They raced across the snow and grabbed the ladder they had stashed away the night before. Two minutes later, they roared off. Wedged behind the driver sat one of the most valuable paintings in the world: Edvard Munch?s The Scream. The thieves had made sure the world was watching: the Winter Olympics, in Lillehammer, began that same morning. Baffled and humiliated, the Norwegian police called on the world?s greatest art detective, Charley Hill, a half-English, half-American undercover policeman. Edward Dolnick?s riveting tale takes us inside the art underworld, from ponytailed aristocrat Lord Bath, to 300-pound fence David Duddin. We meet Munch, too, a haunted misfit who spends nights feverishly trying to paint the visions in his head. Scotland Yard?s Charley Hill, an ex-soldier, a would-be priest, and a complicated mix of brilliance, foolhardiness and charm, is the book?s most compelling character. The hunt for The Scream will either cap his career or end in a fiasco that will dog him forever.

'A masterpiece. Engrossing, entertaining, often surreally hilarious.' -- Mary Roach, author of 'Stiff.'
'Much more than an outstanding detective story that happens to be taken from real life. Dolnick has provided us with an insider's view of the hidden world of art theft, where paintings by old masters are used to settle gambling debts and priceless canvases are rolled up in the trunk. This is a fascinating tale, expertly told, with characters as crisply drawn as any Rembrandt and the sort of intrigue generally found only in a thriller.' -- Arthur Golden, author of 'Memoirs of a Geisha'
'An entertaining account of the eternal struggle between high art and low cunning.' -- Times
'There has never been a better book on art crime.' -- ArtNews
`[Edward Dolnick's] His highly readable and informative caper follows Charley Hill, Scotland Yard's undercover man in the art world, on the missing painting's trail.' -- Observer
`People steal art because they want to and they can. Edward Dolnick's breathless journey through the often absurd world of international art theft explores this idea through a cast of real-life characters straight from a pulp detective novel.' -- Daily Telegraph
`'Stealing the Scream' sometimes feels like a bad Guy Ritchie film script, but is saved by Dolnick's enthusiasm and Hill's charisma. Engaging and at times thrilling.' -- Saturday Telegraph
`This rollicking tale of the art underworld revels in the sheer audacity of the theft and cheers on the eccentric Scotland Yard detective who was determined to get the painting back. Dolnick is a great storyteller, and `Stealing the Scream' is crammed with a colourful cast...' -- Guardian

Edward Dolnick is a former chief science writer at the Boston Globe. He has written for the Atlantic Monthly, the New York Times Magazine and many other publications. He has two grown sons and lives with his wife near Washington, D.C.

GOR001498653
Stealing the Scream: The Hunt for a Missing Masterpiece by Edward Dolnick
Edward Dolnick
Used - Very Good
Paperback
Icon Books Ltd
2008-02-07
272
1840468645
9781840468649
N/A
Book picture is for illustrative purposes only, actual binding, cover or edition may vary.
This is a used book - there is no escaping the fact it has been read by someone else and it will show signs of wear and previous use. Overall we expect it to be in very good condition, but if you are not entirely satisfied please get in touch with us.