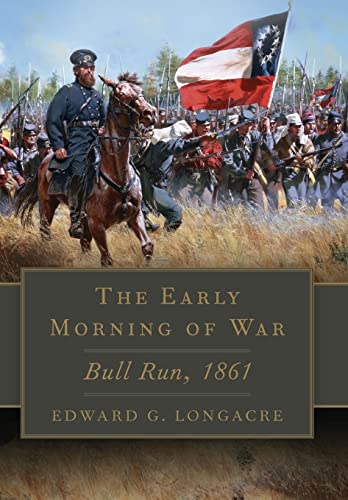 The Early Morning of War
by Edward G. Longacre

Out of Stock
$36.99
inc. GST
A magisterial work by a veteran historian, The Early Morning of War blends narrative and analysis to convey the full scope of the campaign of First Bull Run - its drama and suspense as well as its practical and tactical underpinnings and ramifications.
Very Good
Only 0 left

The Early Morning of War Summary

When Union and Confederate forces squared off along Bull Run on July 21, 1861, the Federals expected this first major military campaign would bring an early end to the Civil War. But when Confederate troops launched a strong counterattack, both sides realized the war would be longer and costlier than anticipated. First Bull Run, or First Manassas, set the stage for four years of bloody conflict that forever changed the political, social, and economic fabric of the nation. It also introduced the commanders, tactics, and weaponry that would define the American way of war through the turn of the twentieth century.

This crucial campaign receives its most complete and comprehensive treatment in Edward G. Longacre's The Early Morning of War. A magisterial work by a veteran historian, The Early Morning of War blends narrative and analysis to convey the full scope of the campaign of First Bull Run - its drama and suspense as well as its practical and tactical underpinnings and ramifications. Also woven throughout are biographical sketches detailing the backgrounds and personalities of the leading commanders and other actors in the unfolding conflict.

Longacre has combed previously unpublished primary sources, including correspondence, diaries, and memoirs of more than four hundred participants and observers, from ranking commanders to common soldiers and civilians affected by the fighting. In weighing all the evidence, Longacre finds correctives to long-held theories about campaign strategy and battle tactics and questions sacrosanct beliefs - such as whether the Manassas Gap Railroad was essential to the Confederate victory. Longacre shears away the myths and persuasively examines the long-term repercussions of the Union's defeat at Bull Run, while analyzing whether the Confederates really had a chance of ending the war in July 1861 by seizing Washington, D.C.

Brilliant moves, avoidable blunders, accidents, historical forces, personal foibles: all are within Longacre's compass in this deftly written work that is sure to become the standard history of the first, critical campaign of the Civil War.

The Early Morning of War Reviews

In this book, Edward Longacre has applied his considerable skills as a biographer to a vivid piece of American history, injecting humanity and fresh insight to the story of the Civil War's first major battle. Practicing the lost art of personification and characterization with both flourish and wisdom, Longacre makes the players in this immense drama live anew."" - John Hennessy, author of Return to Bull Run: The Campaign and Battle of Second Manassas

""Extensively researched and full of fresh insights and information, Edward G. Longacre's finely crafted Early Morning of War offers a remarkably thorough, highly readable account of the men and events that shaped the course of the first great campaign of the American Civil War."" - Ethan S. Rafuse, author of McClellan's War: The Failure of Moderation in the Struggle for the Union and Manassas: A Battlefield Guide

Edward G. Longacre is a retired U.S. Department of Defense Historian and the author of numerous articles and books on the Civil War and U.S. military history, including The Cavalry at Gettysburg, winner of the Fletcher Pratt Award, and Gentleman and Soldier: A Biography of Wade Hampton III, recipient of the Douglas Southall Freeman History Award.

GOR007155466
The Early Morning of War: Bull Run, 1861 by Edward G. Longacre
Edward G. Longacre
Campaigns and Commanders Series
Used - Very Good
Hardback
University of Oklahoma Press
2014-10-30
648
080614498X
9780806144986
N/A
Book picture is for illustrative purposes only, actual binding, cover or edition may vary.
This is a used book - there is no escaping the fact it has been read by someone else and it will show signs of wear and previous use. Overall we expect it to be in very good condition, but if you are not entirely satisfied please get in touch with us.