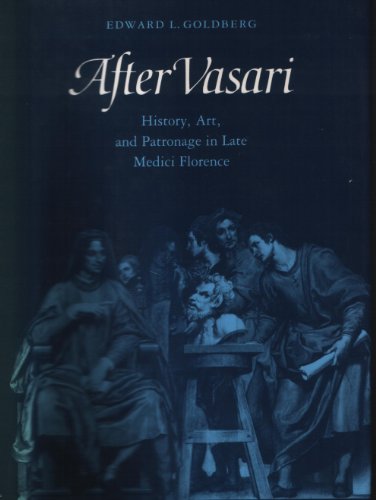 After Vasari
by Edward L. Goldberg

Giorgio Vasari, author of the famed sixteenth-century compendium Lives, was the most influential proponent of the Medici art myth: the doctrine that painting, sculpture, and architecture reached unique perfection in Florence through inspired Medici patronage. By the mid-seventeenth century, however, Vasari's claims were drawing vehement criticism throughout Italy. Seeking to reaffirm the cultural prestige of his family and his nation, Cardinal Prince Leopoldo de' Medici (1617-1675) sponsored a new Florentine edition of artists' lives in the Vasarian tradition.

In After Vasari, Edward Goldberg focuses on Filippo Baldinucci (1625-1696), the chief curator of Leopoldo's remarkable collections. For many years after his patron's death, Baldinucci struggled to realize this great art historiographic project but was continually frustrated by a lack of financial support and by the bitter enmity of other writers on art. He also suffered from chronic depression and from destructive religious obsessions. In tracing the pattern of Baldinucci's successes and failures, Goldberg sheds much new light on the values and customs of late Medici Florence, and on the human dimension of contemporary art historical controversies.

GOR010759298
After Vasari: History, Art, and Patronage in Late Medici Florence by Edward L. Goldberg
Edward L. Goldberg
Used - Very Good
Hardback
Princeton University Press
1989-01-21
328
0691040664
9780691040660
N/A
Book picture is for illustrative purposes only, actual binding, cover or edition may vary.
This is a used book - there is no escaping the fact it has been read by someone else and it will show signs of wear and previous use. Overall we expect it to be in very good condition, but if you are not entirely satisfied please get in touch with us.