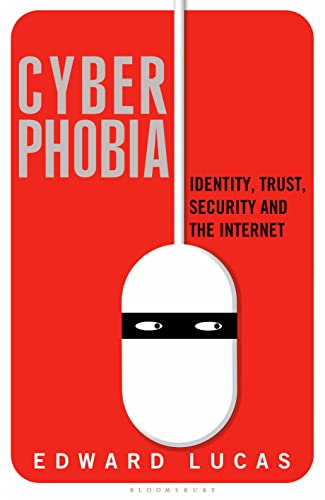 Cyberphobia: Identity, Trust, Security and the Internet by Edward Lucas

Crossing the road, we look both ways. Riding a bicycle at night, we use lights. So why is our attitude towards online security so relaxed? Edward Lucas reveals the ways in which cyberspace is not the secure zone we may hope, how passwords provide no significant obstacle to anyone intent on getting past them, and how anonymity is easily accessible to anyone - malign or benign - willing to take a little time covering their tracks. The internet was designed by a small group of computer scientists looking for a way to share information quickly. In the last twenty years it has expanded rapidly to become a global information superhighway, available to all comers, but also wide open to those seeking invisibility. This potential for anonymity means neither privacy nor secrecy are really possible for law-abiding corporations or citizens. As identities can be faked so easily the very foundations on which our political, legal and economic systems are based are vulnerable. Businesses, governments, national security organisations and even ordinary individuals are constantly at risk and with our ever increasing dependence on the internet and smart-phone technology this threat is unlikely to diminish - in fact, the target for cyber-criminals is expanding all the time. Not only does Cyberphobia lay bare the dangers of the internet, it also explores the most successful defensive cyber-strategies, options for tracking down transgressors and argues that we are moving into a post-digital age where once again face-to-face communication will be the only interaction that really matters.

Edward Lucas has achieved the near-impossible: equipping us all with a highly readable yet instructive guide to the dangers behind our everyday internet use and how best to stay safe. Parents should buy for their children - and vice versa * Sir David Omand, former Director of GCHQ and UK Intelligence and Security Coordinator *
The internet is our greatest vulnerability as well as our greatest resource: hackers and hoodlums can steal your most important resources and disappear into the ether. Edward Lucas not only demonstrates just how vulnerable we are. He demonstrates how we can fight back against the cyber-criminals. And he does so with panache and style - explaining complicated concepts in plain words and brings light to even the darkest corners of the internet * Adrian Wooldridge, author of The Great Disruption: How Business is Coping with Turbulent Times *
Putin [and] his friends ... are gangsters on a scale that makes Al Capone or the Corleones seem small-time ... Lucas is right to castigate our folly in treating all this so lightly * Max Hastings, Sunday Times on Deception *
Entertaining and informative ... Lucas contrasts our complacency and delusion with Russia's ruthless ingenuity * Mail on Sunday, on The New Cold War *
Highly informed, crisply written and alarming ... Outstanding * Evening Standard, on The New Cold War *
An impressive polemic arguing that the West still underestimates the danger that Putin's Russia poses * Sunday Times on The New Cold War *
Unlike all too many authors of books on technology, Lucas does not presume that his readers are au fait with the baffling jargon that puts so many off the subject. His book will be comprehensible even to seemingly incurable cyberphobes. If they confront their fears and read it they will have joined Lucas's fightback against the crooks and spooks who want to exploit our ignorance * Standpoint *
Not only does Cyberphobia lay bare the dangers of the internet, it also explores the most successful defensive cyber strategies, options for tracking down transgressors and argues that we are moving into a post-digital age where once again face-to-face communication will be the only interaction that really matters * Daily Telegraph *
Cyberphobia provides a readable, exciting, and unusually accurate introduction to the dangerous side of information technology, which is now shaping most people's lives more than they realize. It will make it clear why people like me, who deal with this subject all day long, have trouble sleeping. -- Scott Borg, Director (CEO) and Chief Economist, U.S. Cyber Consequences Unit
A primer on the subject for people who haven't a clue about how the internet works and yet depend on it every day. But people don't need to be experts to learn how to protect themselves. This is Lucas's most compelling point, and his most urgent ... Here, Lucas is doing a public service ... Where Lucas gets really provocative is in laying blame on institutions for their failure to shore up a system that they know is rife with dangers * Literary Review *
Meticulous, disconcerting ... [Edward Lucas] brings a welcome expertise in espionage and security shenanigans to his task [and is] at his best when making tech norms seem newly strange ... he's likely to ruffle further geek feathers with his cynicism towards the sacred principle or moronic cult of online openness and anonymity ... Despite the title, Lucas isn't peddling a big idea or a trendy noun. I'd call what's on offer outraged scepticism rather than outright phobia - and it's all the better for it * Prospect *
An enlightening, highly accessible look at security threats on the Internet, with sound solutions for protection * Booklist *
Profound ... an important contribution to an ongoing debate * Kirkus *
Well-researched horror tome that justifies the title * Oldie *
He argues persuasively ... He is right to point out a secure and reliable way to identify ourselves online is needed * Times Literary Supplement *

Edward Lucas is a senior editor at the Economist. He has been covering Eastern Europe since 1986, with postings in Berlin, Moscow, Prague, Vienna, and the Baltic states. His expertise includes energy, cyber-security, espionage, Russian foreign and security policy and the politics and economics of Eastern Europe. He is a regular contributor to the BBC's Today and Newsnight programmes, and to NPR, CNN and Sky News. He is the author of The New Cold War which is regularly updated and has been published in more than fifteen languages. He is married to the columnist Cristina Odone and lives in London. @edwardlucas

GOR006902762
Cyberphobia: Identity, Trust, Security and the Internet by Edward Lucas
Edward Lucas
Used - Like New
Hardback
Bloomsbury Publishing PLC
2015-08-27
336
1408850125
9781408850121
N/A
Book picture is for illustrative purposes only, actual binding, cover or edition may vary.
The book has been read, but looks new. The book cover has no visible wear, and the dust jacket is included if applicable. No missing or damaged pages, no tears, possible very minimal creasing, no underlining or highlighting of text, and no writing in the margins.