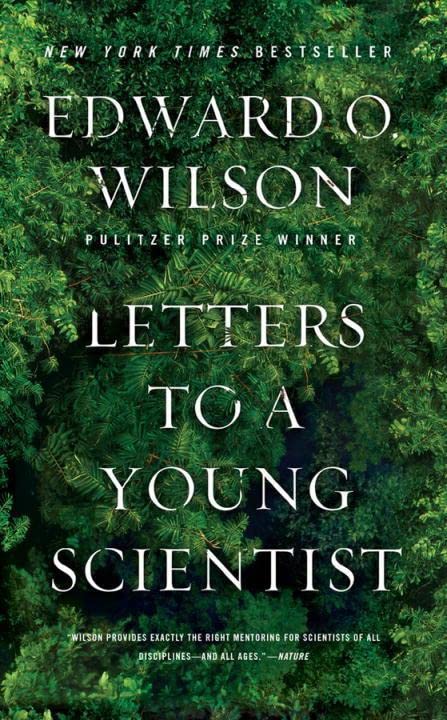 Letters to a Young Scientist Summary

Edward O. Wilson has distilled sixty years of teaching into a book for students, young and old. Reflecting on his coming-of-age in the South as a Boy Scout and a lover of ants and butterflies, Wilson threads these twenty-one letters, each richly illustrated, with autobiographical anecdotes that illuminate his career-both his successes and his failures-and his motivations for becoming a biologist. At a time in human history when our survival is more than ever linked to our understanding of science, Wilson insists that success in the sciences does not depend on mathematical skill, but rather a passion for finding a problem and solving it. From the collapse of stars to the exploration of rain forests and the oceans' depths, Wilson instills a love of the innate creativity of science and a respect for the human being's modest place in the planet's ecosystem in his readers.

Letters to a Young Scientist Reviews

"The eminent entomologist, naturalist and sociobiologist draws on the experiences of a long career to offer encouraging advice to those considering a life in science... Glows with one man's love for science." -- Kirkus Reviews
"Edward O. Wilson, the evolutionary biologist who has studied social behavior among insects and humans, offers advice to aspiring researchers...A naturalist at heart, he plays down technology, math, even intelligence, proposing that a good scientist should be 'bright enough to see what can be done but not too bright as to become bored doing it.'...delivers deep insights into how observation and experiment drive theory." -- Jascha Hoffman - New York Times
"I want to express my gratitude. Thank you for reminding me and thousands of others why we became scientists. Your book Letters to a Young Scientist is first and foremost a book about passion and the delight of discovery." -- Bill Streever - New York Times Book Review
"In this fund of practical and philosophical guidance distilled from seven decades of experience, Wilson provides exactly the right mentoring for scientists of all disciplines-and all ages... This is no pompous, deeply philosophical treatise on how great ideas develop. Wilson shares his simple love for ants and their natural history, revelling in them without hesitation. Everything else follows." -- Nature
"Inspiring... Ought to be on the shelves of all high school and public libraries." -- Library Journal

Edward O. Wilson is the author of more than thirty books, including Anthill, a novel, and The Meaning of Human Existence, a finalist for the National Book Award. The winner of two Pulitzer Prizes, Wilson is a professor emeritus at Harvard University and lives with his wife, Irene, in Lexington, Massachusetts.

GOR005990920
Letters to a Young Scientist by Edward O. Wilson (Harvard University)
Edward O. Wilson (Harvard University)
Used - Very Good
Paperback
WW Norton & Co
2014-04-07
256
0871403854
9780871403858
N/A
Book picture is for illustrative purposes only, actual binding, cover or edition may vary.
This is a used book - there is no escaping the fact it has been read by someone else and it will show signs of wear and previous use. Overall we expect it to be in very good condition, but if you are not entirely satisfied please get in touch with us.