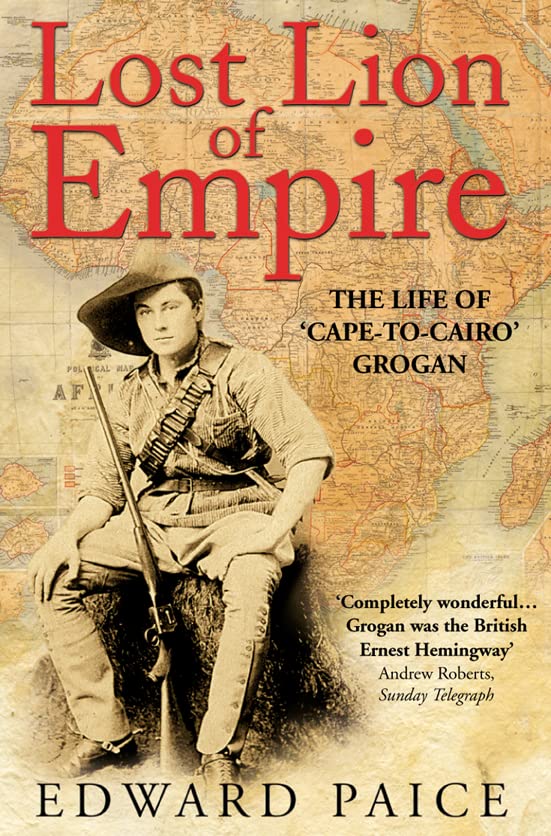 An African Younghusband - the compelling life of a great adventurer.

Lost Lion of Empire: The Life of 'Cape-to-Cairo' Grogan by Edward Paice

An African Younghusband - the compelling life of a great adventurer.

Ewart Grogan, 'the baddest and boldest of a bad bold gang' of settlers in Kenya, was one of the most brilliant and controversial figures of African colonial history.

When he proposed to a young heiress, Gertrude Coleman, he needed to prove himself a `somebody' to her father in order to win her hand. He did so in inimitable style, announcing that he intended to accomplish the first south-to-north traverse of Africa. In 1900, after two years of illness and extreme hardship, he arrived triumphantly in Cairo.

He became an instant celebrity, and, on returning to England, at last married Gertrude. Now with a considerable fortune at his disposal, after a short but successful spell in South Africa he arrived in British East Africa. He quickly became a leader among the settlers, and embarked on a lifetime of grand projects, forced through despite government inertia, enormous natural obstacles and the looming threat of bankruptcy. Time after time he proved the doubters wrong, as he pulled off the seemingly impossible. Despite this frenetic activity, and despite his love for Gertrude, he still managed to find the time to run two separate families and father numerous children by various mothers.

The abrasive and glamorous Grogan, with Delamere, was one of the founding fathers of Kenya - `Lost Lion of Empire' is a brilliant and powerful account both of the life of an exceptional man and the birth of a country.

Edward Paice was a History Scholar at Magdalene College, Cambridge and winner of the Leman Prize. After ten years working as an investment analyst in the City he spent the best part of four years in Kenya and newly-independent Eritrea, writing travel and natural history guides. He regularly lectures and contributes articles on a variety of African topics, is a Fellow of the Royal Geographical Society, and a member of the Royal Institute of International Affairs.

GOR001244687
Lost Lion of Empire: The Life of 'Cape-to-Cairo' Grogan by Edward Paice
Edward Paice
Used - Very Good
Paperback
HarperCollins Publishers
2002-02-04
496
0006530737
9780006530732
N/A
Book picture is for illustrative purposes only, actual binding, cover or edition may vary.
This is a used book - there is no escaping the fact it has been read by someone else and it will show signs of wear and previous use. Overall we expect it to be in very good condition, but if you are not entirely satisfied please get in touch with us.