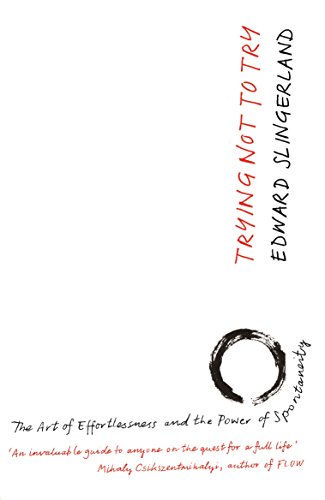 Trying Not to Try
by Edward Slingerland

Used Price
$21.99
inc. GST
Free Shipping in Australia
A deeply original exploration of the power of spontaneity - and why it's essential to our wellbeing, both as individuals and as a society
Reviews:
Trustpilot
Very Good

Trying Not to Try Summary

Trying Not to Try: The Ancient Art of Effortlessness and the Surprising Power of Spontaneity by Edward Slingerland

A Guardian Best Book of 2014 A 2014 Brain Pickings Best Book on Psychology, Philosophy, and How to Live Meaningfully Why is it hard to fall asleep the night before an important meeting? Or be charming and relaxed on a first date? What is it about a comedian whose jokes fall flat or an athlete who chokes? What if, contrary to what we have long been told, spontaneity - not striving - is the answer to success? Through stories of mythical creatures and drunken cart riders, jazz musicians and Japanese motorcycle gangs, Slingerland effortlessly blends Eastern thought and cutting-edge science to show us how we can embody a spontaneous way of being and live more fulfilling lives.

Customer Reviews - Trying Not to Try

Trying Not to Try Reviews

Ancient Chinese philosophy has never been more accessible. Not even in ancient China. Edward Slingerland is not just a philosopher, he's a time traveller -- RUSSELL BRAND
In this fascinating book, Edward Slingerland tackles one of the most infuriating obstacles we encounter in our attempts to live meaningful lives. When we try with too much conscious effort to feel happy, or achieve our goals, we sabotage ourselves - but trying to be spontaneous is equally futile. The way out of this paradox is wu-wei, the ancient Chinese ideal of effortless yet accomplished living. Trying Not to Try is both a deeply researched history of this enviable state of relaxed success, and a witty guide to achieving it yourself. Don't overthink whether you're going to read it - just read it -- OLIVER BURKEMAN * * author of THE ANTIDOTE * *
Trying Not to Try navigates the confluence of two mighty rivers: the burgeoning science of the mind and the classic wisdom of China's Taoist and Confucian traditions. This is a thoughtful, grounded book about traditions that should be better known - and more often put into practice - in the West -- DANIEL PINK, author of Drive and To Sell is Human
East meets West in Edward Slingerland's Trying Not to Try, an entertaining and thought-provoking account of how the principles of ancient Chinese thought continue to apply--indeed, may apply even more - in modern times. Slingerland will make you reconsider your approach to everyday life and will challenge you to approach success - and failure - in a new, refreshing and reenergizing light -- MARIA KONNIKOVA * * author of MASTERMIND * *
A work of seminal importance. Yet never was there such an important book that takes itself so lightly. Slingerland explains the correspondence between ancient Chinese philosophical ideas about wu-wei, or doing by not doing, and modern neuroscience. In doing so in erudite fashion, he also manages to discuss Woody Allen, magic mushrooms, his daughter's storybooks, Luke Skywalker and how hard it is to get a date when you're desperate . . . While it will surely take some effort to spread wu-wei in a Western culture saturated by the idea that emotions have to be controlled by the mind, Trying Not to Try is a great step forward. Slingerland's writing, if not wu-wei, is without a doubt effortless * * Huffington Post * *
Ancient China produced some of the greatest wisdom in human history, and Slingerland makes those riches accessible to modern readers. This book represents the humanities at their best - it's grounded in careful research about an ancient culture, yet speaks to the eternal challenges of being human in a complex and confusing world * * JONATHAN HAIDT, author of The Righteous Mind * *
Trying Not to Try is fascinating, original, and mind-expanding - it shows us a completely different way of thinking about success and happiness -- AMY CHUA * * author of Battle Hymn of the Tiger Mother * *
Through a combination of hard science and ancient philosophy, Trying Not to Try has convinced me that my usual approach to life - smashing through walls and grinding out painful victories - isn't all it's cracked up to be. Sometimes trying hard is overrated. Slingerland has written a charming, intellectually rigorous book that can help all of us improve our lives -- JONATHAN GOTTSCHALL * * author of The Storytelling Animal * *
A fascinating read. With state-of-the art science and interesting stories, Slingerland provides key insights from the East and West for achieving happiness and well-being -- SIAN BEILOCK * * author of Choke * *
Valuable and refreshing; it illuminates traditions unfairly overlooked in the West, and does so in a way that's clear-eyed, amenable to science * * Skinny * *
Trying not to Try is an enlightening introduction to the often misunderstood mindset of wu wei, the "being in the moment" that is the key to Eastern wisdom. Slingerland's volume is an invaluable guide to anyone on the quest for a full life, lived spontaneously -- Mihaly Csikszentmihalyi * * author of FLOW * *
An insightful and lucid introduction to some of the most fruitful ideas in ancient Chinese philosophy -- JULIAN BAGGINI * * Observer * *
The thoroughness and dedication to relating these ancient Chinese concepts to a contemporary culture is admirable. The balanced portrayal of strengths and weakness is honest and refreshing . . . this text fulfils an important role by challenging a dominant cultural mindset and encouraging diversity in the schools of thought used to define effort and success * * Psychologist * *
Edward Slingerland's interesting recent book Trying Not to Try contrasts the overscheduled busywork of a modern productivity freak with what he calls "body thinking" . . . This is certainly desirable for a tennis player facing a 130mph serve, or a martial artist, or an improvising musician, but Slingerland wants to argue that social action can become just as virtuously "spontaneous" as well-drilled athletic or artistic action * * New Statesman * *

Edward Slingerland is an internationally recognized expert in both early Chinese thought and the links between cognitive science and the humanities. He is Professor of Asian Studies, Associate Member in the Departments of Philosophy and Psychology, and holds the Canada Research Chair in Chinese Thought and Embodied Cognition at the University of British Columbia. He is the author of Effortless Action (2003) and What Science Offers the Humanities (2008).

GOR006473188
Trying Not to Try: The Ancient Art of Effortlessness and the Surprising Power of Spontaneity by Edward Slingerland
Edward Slingerland
Used - Very Good
Paperback
Canongate Books Ltd
2015-01-01
304
0857863487
9780857863485
N/A
Book picture is for illustrative purposes only, actual binding, cover or edition may vary.
This is a used book - there is no escaping the fact it has been read by someone else and it will show signs of wear and previous use. Overall we expect it to be in very good condition, but if you are not entirely satisfied please get in touch with us.