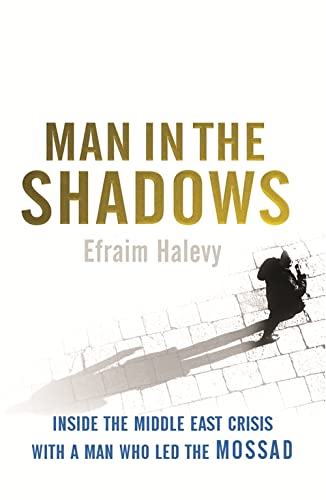 Man in the Shadows
by Efraim Halevy

Out of Stock
$18.49
inc. GST
A gripping inside look at the Middle East and the future of our world from the former director of Israel's Mossad.
Like New
Only 0 left

Man in the Shadows Summary

Man in the Shadows: Inside the Middle East Crisis with a Man who Led the Mossad by Efraim Halevy

A gripping inside look at the Middle East and the future of our world from the former director of Israel's Mossad.

From Operation Desert Storm to the beginning of US incursions into Iraq, Efraim Halevy was Deputy Director and then Director of Israel's Mossad, arguably the most developed and, sometimes, ruthless intelligence service in the world. MAN IN THE SHADOWS is Halevy's memoir of that period from his vantage point inside the Mossad, as well as a look at what lies ahead for a world transformed by Islamic terrorism. Having served as the secret envoy to Prime Ministers Rabin, Shamir, Netanyahu, Barak and Sharon, Halevy was privy to, and collector of, some of the most sensitive information coming out of the region. Beginning with a prologue that describes a visit he made to Jordan in 1993, Halevy looks back to Desert Storm, an event he calls 'an epic of unfinished business' and brings the reader up to the present day through 9/11 and the WMD crisis in Iraq.

Informed by his extraordinary access from the beginning of his Mossad career in 1961, he writes frankly of the Israeli PMs he worked under as well as most of the other major players in the region and around the world: Yasir Arafat, Saddam Hussein, Hafez Assad, Hosni Mubaraq, Crown Prince Abdullah, Mu'amar Qadaffi, Presidents Clinton and Bush, as well as former CIA director George Tenet and counter-intelligence chief James Angleton. Though Halevy looks to the past, he also looks to the future and talks bluntly about how the world might achieve peace in the region and elsewhere. Much of what he has to say will surprise and shock even those readers well versed in the complexities of the region.

Man in the Shadows Reviews

"By filtering events through the unfamiliar lens of the spymaster, Mr. Halevy gives a fresh twist to the story..."-"The Economist" "Spotlights the most pressing and controversial areas where foreign and defense policy making, intelligence gathering, and political ambitions collide...."-"The New York Sun""At a time when we face unprecedented demands on intelligence, Halevy's insights...should be required reading."-Dennis Ross, former American envoy to the Middle East

Efraim Halevy, the former head of the Mossad, is now the Head of the Centre for Strategic and Policy Studies at the Hebrew University of Jerusalem. He was also Israel's ambassador to the European Union before his appointment to the Mossad. During the time he worked for the Israeli government, he was the secret envoy to five of that country's Prime Ministers: Rabin, Shamir, Netanyahu, Barak and Sharon. In April 2005 he received the prestigious Chaim Herzog Prize for extraordinary contributions to the state of Israel.

GOR010424643
Man in the Shadows: Inside the Middle East Crisis with a Man who Led the Mossad by Efraim Halevy
Efraim Halevy
Used - Like New
Paperback
Orion Publishing Co
2007-04-05
304
0753821931
9780753821930
N/A
Book picture is for illustrative purposes only, actual binding, cover or edition may vary.
The book has been read, but looks new. The book cover has no visible wear, and the dust jacket is included if applicable. No missing or damaged pages, no tears, possible very minimal creasing, no underlining or highlighting of text, and no writing in the margins.