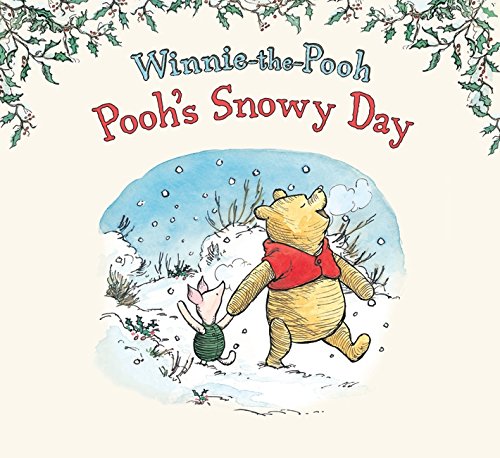 It's a Snowy Day in the Hundred Acre Wood, and Winnie-the-Pooh and Piglet decide to build a house for Eeyore.

It's a Snowy Day in the Hundred Acre Wood, and Winnie-the-Pooh and Piglet have a great idea - why not build a house for Eeyore? Soon everybody wants to lend a hand. A heartwarming story perfect for the festive season. The perfect stocking filler for fans of the Bear of Little Brain aged 2 and up. With beautiful illustrations by Andrew Grey in the style of the original artwork by E. H. Shepard.

The nation's favourite teddy bear has been delighting generations of children for 90 years.

A. A. Milne's classic children's stories - featuring Tigger, Piglet, Eeyore, Christopher Robin and, of course, Pooh himself - are both heart-warming and funny, teaching lessons of friendship and reflecting the power of a child's imagination like no other story before or since.

Pooh ranks alongside other beloved characters such as Paddington Bear, and Peter Rabbit as an essential part of our literary heritage. Whether you're 5 or 55, Pooh is the bear for all ages.

Andrew Grey is an author who has written several 'Winnie-The-Pooh' titles for Disney including 'Pooh's Christmas Adventure', 'Winnnie-the-Pooh ABC' and 'Wonderful Words with Winnie-the-Pooh'.

GOR003425064
Winnie-the-Pooh: Pooh's Snowy Day by Andrew Grey
Andrew Grey
Used - Very Good
Paperback
Egmont UK Ltd
2011-09-05
32
140525775X
9781405257756
N/A
Book picture is for illustrative purposes only, actual binding, cover or edition may vary.
This is a used book - there is no escaping the fact it has been read by someone else and it will show signs of wear and previous use. Overall we expect it to be in very good condition, but if you are not entirely satisfied please get in touch with us.