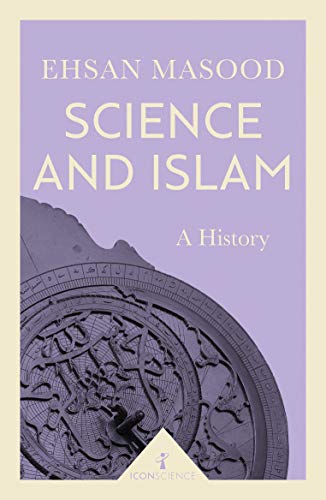 Science and Islam (Icon Science): A History by Ehsan Masood

Long before the European Enlightenment, scholars and researchers working from Samarkand in modern-day Uzbekistan to Cordoba in Spain advanced our knowledge of astronomy, chemistry, engineering, mathematics, medicine and philosophy.
From Musa al-Khwarizmi who developed algebra in 9th century Baghdad to al-Jazari, a 13th-century Turkish engineer whose achievements include the crank, the camshaft and the reciprocating piston,
Ehsan Masood tells the amazing story of one of history's most misunderstood yet rich and fertile periods in science, via the scholars, research, and science of the Islamic empires of the middle ages.

`Science and Islam, a fascinating and clearly written book.' -- New Scientist
`This is a delightful and approachable book, packed with surprises and treats and offered by a writer whose passion for the subject does not daunt his objectivity.' -- Wharf
`Refreshingly different ....Masood's [book] emphasis on context, combined with his easy prose, measured self-confident tone, and an effort to inject compelling human drama into the narrative, makes the present book - for the most part - wonderfully captivating.' -- Arif Babul * Observatory Magazine *

Ehsan Masood worked for the journal Nature as a writer from 1995 to 1999 and again as acting chief commissioning editor in 2008/2009. He has also worked as Opinion Editor of New Scientist, and written for Prospect magazine and openDemocracy.net, as well as The Times, The Guardian and Le Monde.

GOR008238867
Science and Islam (Icon Science): A History by Ehsan Masood
Ehsan Masood
Icon Science
Used - Very Good
Paperback
Icon Books Ltd
2017-04-06
256
1785782029
9781785782022
N/A
Book picture is for illustrative purposes only, actual binding, cover or edition may vary.
This is a used book - there is no escaping the fact it has been read by someone else and it will show signs of wear and previous use. Overall we expect it to be in very good condition, but if you are not entirely satisfied please get in touch with us.