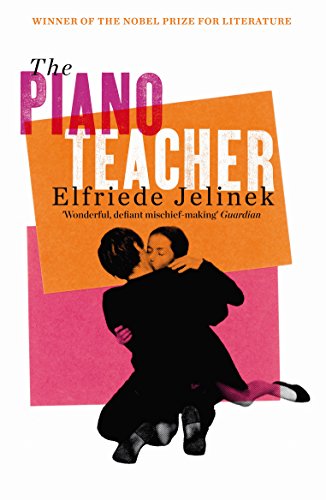 The Piano Teacher
by Elfriede Jelinek

The Piano Teacher by Elfriede Jelinek

In this demented love story the hunter is the hunted, pain is pleasure, and spite and self-contempt seep from every pore. * Guardian *
As a portrait of repressed female sexuality and a damaged psyche, The Piano Teacher glitters dangerously * Observer *
Some may find Ms Jelinek's ruthlessly unsentimental approach - not to mention her image of Vienna as a bleak city of porno shops, poor immigrants and loveless copulations - too much to take. Her picture of a passive woman who can gain control over her life only by becoming a victim is truly frightening. Less squeamish readers will extract a feminist message: in a society such as this, how else can a woman like Erika behave? * New York Times Book Review *
Heavily symbolic and bleakly realistic, The Piano Teacher turns its female heroine, Erika Kobut, into an extended metaphor for a doomed society... Passionately political under its dense mantle of sexual imagery, the novel shares the dark world view long common to Eastern European literature and now increasingly evident in books from ostensibly more fortunate countries, insistently calling our attention to the discrepancy between the Vienna of our fantasies and the one in which Jelinek lives * Los Angeles Times *
A brilliant, deadly book -- Elizabeth Young
A dazzling performance that will make the blood run cold -- Walter Abish
The Piano Teacher is an astounding book * Sunday Herald *
There are some horrifically crazed laughs to be had at the antics of mother and daughter trapped in their domestic hell * Irish Times *
Jelinek's expressionistic language indulges with lethal intensity * Metro *
Jelinek's fragmented style blurs reality and imagination, creating a harsh, expressionistic picture of sexuality * Scotland on Sunday *
A brilliant, bitter, wonderful portrait of mother and daughter, artist and lover * John Hawkes *
A startling novel... eloquent, intelligent and deeply unsettling; the polar opposite of pornography. -- Arifa Akbar * Independent *
Terrifyingly powerful -- Hermione Hoby * Observer *

Elfriede Jelinek was born in Austria in 1946 and grew up in Vienna where she attended the famous Music Conservatory. The leading Austrian writer of her generation, she has been awarded the Heinrich Boell Prize for her contribution to German literature. The film of The Piano Teacher by Michael Haneke won the three main prizes at Cannes in 2001. In 2004, Elfriede Jelinek was awarded the Nobel Prize for Literature.

GOR002391249
The Piano Teacher by Elfriede Jelinek
Elfriede Jelinek
Serpent's Tail Classics
Used - Very Good
Paperback
Profile Books Ltd
2010-11-04
288
1846687373
9781846687372
N/A
Book picture is for illustrative purposes only, actual binding, cover or edition may vary.
This is a used book - there is no escaping the fact it has been read by someone else and it will show signs of wear and previous use. Overall we expect it to be in very good condition, but if you are not entirely satisfied please get in touch with us.