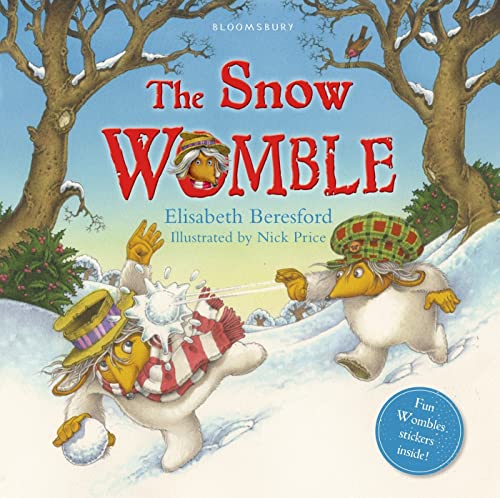 The Snow Womble
by Elisabeth Beresford

The Snow Womble by Elisabeth Beresford

Snow has arrived on Wimbledon Common! The young Wombles, including Bungo, Orinoco and Tomsk, can't wait to start sledging, making snow Wombles and generally having fun in the snow. Then one particular Womble decides to play a snowy trick on the small Wombles . . . A funny, warm picture book, perfect to curl up with on a cold Christmas night.

No kid should grow up without having the Wombles in their lives * Bookbag *
Endearing adventures involving gathering and sorting rubbish, braving meetings with humans and dogs and, in the nicest possible way, making sure the world is a better place -- Julia Eccleshare * Love Reading 4 Kids *
A genuine classic returns . . . A new generation will delight in the adorable Wombles of Wimbledon Common and, with their passion for recycling, they couldn't be better role models. Nostalgic adults will also love getting reacquainted with the furry crew * Saga *

Elisabeth Beresford first came up with the idea for the Wombles characters when walking on Wimbledon Common with her two children. She hoped that the Wombles stories would encourage children to fight pollution and to think up ways of 'making good use of bad rubbish'. In fact, the Wombles so charmed the nation that they were chosen as the mascots for the Tidy Britain campaign. Since then they have had their own television series. Elisabeth Beresford was awarded an MBE for her services to children's literature in 1998. Nick Price is an established and popular illustrator. As well as The Wombles series, he has illustrated numerous books for children, including Pongwiffy, Clover Twig and Tumtum and Nutmeg.

GOR004957963
The Snow Womble by Elisabeth Beresford
Elisabeth Beresford
Used - Very Good
Paperback
Bloomsbury Publishing PLC
2012-10-11
32
1408834243
9781408834244
N/A
Book picture is for illustrative purposes only, actual binding, cover or edition may vary.
The book has been read but remains in clean condition. All pages are intact and the cover is intact. Some minor wear to the spine.