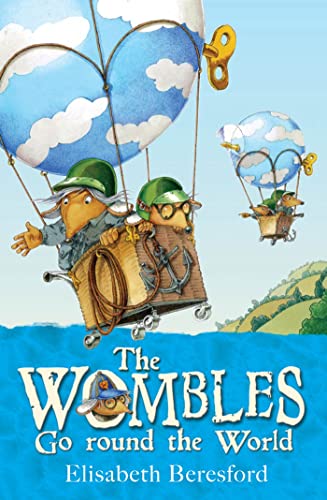 The Wombles Go round the World
by Elisabeth Beresford

Used Price
$15.99
inc. GST
Free Shipping in Australia
Classic and much loved characters brought back into print with a fresh new cover look and inside illustrations to celebrate over 40 years of the Wombles
Reviews:
Trustpilot
Very Good Good

The Wombles Go round the World Summary

The Wombles Go round the World by Elisabeth Beresford

Great Uncle Bulgaria loves telling the ancient and revered history of the Womble clans to the younger Wombles. But to his great sadness he notices that the young Wombles are not nearly as interested in the history as he is. So Great Uncle Bulgaria decides to take action and show these young Wombles how wonderful - and international - the history of the Wombles is. Tobermory invents some very eco-friendly clockwork air balloons to travel in and Orinoco, Bungo, Tomsk and Wellington are sent variously to America, Tibet and Australia. In these interesting and far-flung places the young Wombles get quite as much excitement as they could wish for!

Customer Reviews - The Wombles Go round the World

The Wombles Go round the World Reviews

'A lively, entertaining and humorous book, stuffed with ingenious ideas and endearing characters' * The Times *
'The six original titles by Elizabeth Beresford are back in print, with an environmental message that has never been more relevant. Perfect for 8-to 10-year-olds' * Telegraph magazine *
'Today's children will be as charmed as their parents by Great Uncle Bulgaria, Orinoco, Bungo and Tobermory and their quest to recycle rubbish and put it to good use' * www.express.co.uk *

Elisabeth Beresford first came up with the idea for the Womble characters when walking on Wimbledon Common with her two children. She started sketching out the characters that day: Great Uncle Bulgaria was based on her father-in-law, Tobermory on her brother (an inventor), Orinoco on her son, and Madame Cholet on her mother. She hoped that the Wombles stories would encourage children to fight pollution and to think up ways of 'making good use of bad rubbish'. In fact, the Wombles so charmed the nation that they were chosen as the mascots for the Tidy Britain campaign. Since then they have had their own television series, first broadcast on Jackanory. Elisabeth Beresford was awarded an MBE for her services to children's literature in 1998.

GOR002666048
The Wombles Go round the World by Elisabeth Beresford
Elisabeth Beresford
Used - Very Good
Paperback
Bloomsbury Publishing PLC
2011-03-07
256
1408808358
9781408808351
N/A
Book picture is for illustrative purposes only, actual binding, cover or edition may vary.
This is a used book - there is no escaping the fact it has been read by someone else and it will show signs of wear and previous use. Overall we expect it to be in very good condition, but if you are not entirely satisfied please get in touch with us.